The whole journey is been characterized by the relative good weather, sunny spells and numerous widely scattered showers whooshing over our track. Those many squalls we encounter come accompanied by gusty winds and bring rain and sleet. On top of that, the high winds that have been blowing for the last days, have generated huge waves that travel along the broad Scotia Sea without an obstacle.

In a journey under those circumstances, quite a lot of sailhandling is granted. And already began with the break of new day, when at 07:00h the wind changed from W-ly to WSW and started blowing hard with 38kn gusts. Royals, Outer Jib and Fore Course have to come down and quickly furled, all followed by jibing to Starboard Tack and changing course from 45º to 70º, tough keeping good speeds of 8 to 9kn.

Hale, snow and rain showers keep passing by in the morning, easily spotted by the lookouts as black clouds in the horizon rapidly approaching us. Those showers, brief but with heavy winds associated in a concentrated zone, are also identifiable in the wheelhouse radar, giving a bit of time to prepare ourselves before they hit us. Like this we end up clueing up and furling Main course and Top Gallants, together with the Mizzen Topmast Staysail. The many squalls and their associated change on sea and wind conditions, made for a more unstable and variable weather, giving us a minimum of 20kn steady breeze up to strong 45kn, blowing S-ly to W-ly. Our course alters accordingly from 60º to 90º, and actually, due to all the windshifts and while riding considerable big swells, steering is taken by Mate and Captain from the wheelhouse, not to be passed again to voyage crew until late in the afternoon, when we ride more before the wind. On that situation hands are needed on deck once more to drop the Dekzbabber, set the Main Course and the smaller Aap over the main deck. On more stable wind field, when less menacing showers seem to approach us, Top Gallants are unfurled and set again, just before dinner starts. Night-time falls and with it brings another wind shift, now starts to blow more W-ly or even veering to W by N. To keep steering straight to the northern shores of South Georgia is time to call the watch on deck and make a new jibe after receiving the proper instructions.

Fair winds and good guidance for sailhandling brought us 184nm closer to South Georgia in the last 24h. Only 239nm left to arrive, if winds blow according to forecast they would probably allow for a bit earlier arrival to the island. Just in case, the mandatory biosecurity clean-ups and checks before doing any activity ashore, started today and they will run also during the following day. Also tomorrow will be the day for briefings and preparations before arrival.

During the day we receive the visit of several Hourglass dolphin’s small groups. Fast as they are, they seem to enjoy racing the same big swells that often keep our main deck awash. Eventually bow-riding the ship, today they didn’t stay too long with us. Just enough time for everybody to have a quick look at those small oceanic dolphins, with their black back and white hourglass pattern on their side. Frequently leaping off the water, today they preferred to travel close to the surface with their dorsal fins breaking the waves raising a splash in front of it. They are characteristic of those Subantarctic and Antarctic waters, being the most common dolphin at those latitudes. 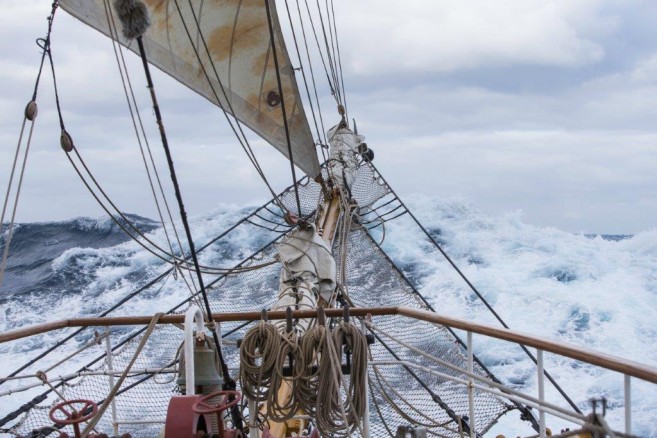