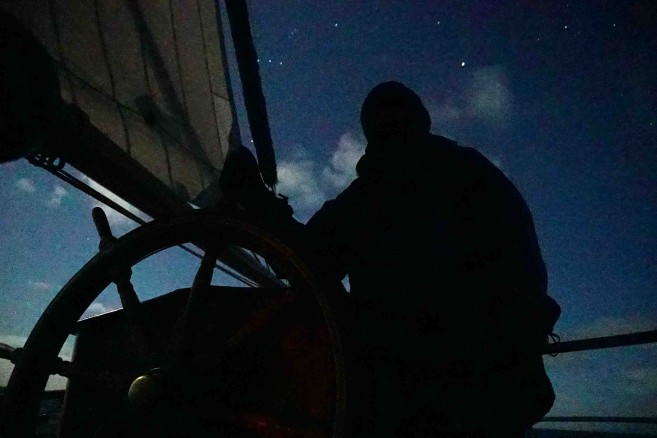 The shadow turned into a cruise ship, one of the larger ones, carrying its cargo of 500 passengers down to the Antarctic from Ushuaia.  This was the first sign of human activity we’d seen since Grytviken on South Georgia, eight days earlier.

As the large ship crossed our bows, I was wondering whether any of their passengers were awake at this early time.  What a vision we would be for them looking out their Stateroom windows.  Here was the ‘Europa’, sailing close hauled with jibs, staysails and topsails set, heeling under the pressure of the wind and plowing through the waves, our small figures of lookouts and helm on deck.

I wondered whether any of them would think of us as a dream, maybe to them we were Shackleton’s ‘Endurance’ or Nordenskjolds’s ‘Antarctic’, transporting them back over a century into the past as we disappeared back into the fog and spray.

As I headed back into the deckhouse to take off the safety gear, put the gloves on the heater and peel out of the many layers of jumpers and jackets, I did not envy them and I turned into my bunk with a smile on my face.

What a lovely piece of writing. Can't wait to hear about all your adventures when you get back.

A lovely piece, looking forward to hearing all about your adventures when you get home. Miss you xxxx