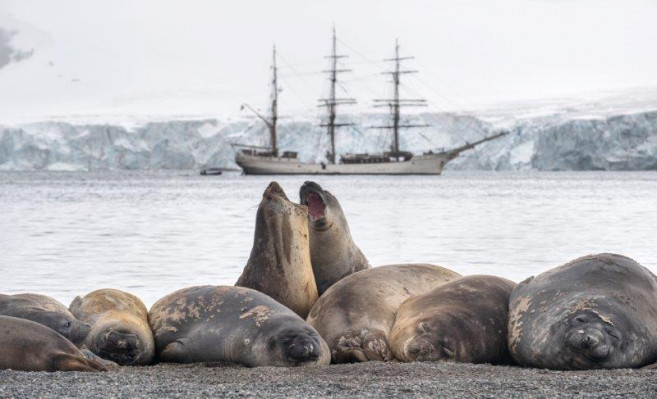 As forecasted, 35 to 40kn of Easterly winds blow after leaving or anchorage at Barrientos Island. Heading eastwards among the English Strait, we brave our way under both our engines against high swells as the ship pitches and waves crash over the Fore deck.

Open to the Bransfield Strait, the Southeastern shores of the South Shetland often receive its furious winds and swells, but their northern shores are not much better, as they face the Drake Passage.

Getting off the English Strait and turning South first, to start rounding the East coast of Greenwich Island, we don’t fight against the elements anymore but now we have the chance to start setting some sail, as also the wind seems to see out to about 25kn. Fore Top Mast Staysail, Aap and Spanker help on our way until the Mc Farlane Strait opens at our Starboard side. After leaving behind the spectacular cliffs, rocks and glaciers of Fort Point. Swell crashes against its 85m high crags and the both sides of the isthmus that connect them to Greenwich Island. Sailing along and leaving such spectacular sight behind, we are just getting into Mc Farlane Strait for a few miles until arriving to Yankee Harbour. All those places and names keep bringing us back to the very early ages of Antarctic discovery and exploration, as the South Shetland Islands and specially all the area where we are sailing those days, were the first lands to be ever sullied by human footsteps. For instance, this waterway, roughly parallel to the English Strait, separating Greenwich and Livingston Islands, had its name appearing on an 1822 chart by Captain George Powell, a British sealer, and it has been used since then. Mc Farlane was the Captain of the brig “Dragon”, which undertook several sealing expeditions in the South Shetlands already in 1820.

Now, running with the wind, Main Lower Top sail is set and Dekzwabber, Spanker is stowed away, and despite having the same high swells and strong winds that made for the exciting morning, now the heeling and pitching diminishes and waves don’t sweep over our decks, while many look in awe to the many glaciers falling from the high peaks of Greenwich and Livingston Islands, reaching the sea with their high fronts.

By mid-morning we had already covered the 20nm from our last anchorage to the glaciers and land spit that enclose Yankee Harbour, our destination for the next landing. This bay is framed by the spectacular Glacier Bluff on one side and the flat sandy Spit Point on the other, and indents the SW side of Greenwich Island. Yankee Harbour was known to both American sealers and the British as early as 1820. With such a sight in front of us, and with the wind blowing hard, it was time to strike and furl all sails that we used during the morning. From aloft the views of the inner harbour of Yankee revealed lots of wind and white caps on the surface waters, local conditions with the wind blowing hard from the glaciers surrounding the bay straight to the sea. Unfortunately, the narrow entrance to the natural harbour, didn’t allowed for a safe navigation through. Then, Captain decides to seek a different anchorage

outside and wait for a while to see how the wind and sea state will evolve for the next couple of hours. After a short scenic little tour looking for suitable spot for anchoring, finally we stopped surrounded by the 30m high ice cliffs of the Bluff Glacier.

It took until about the afternoon coffee-time to decide whether to venture into the narrows of Yankee or divert towards the close by Half Moon Island. It all depended on the winds and if they followed a decreasing tendency. But by then it looked like there was a good chance to give it a try, or if the conditions in the harbour weren’t good enough, turn around and he’d to our next destination, just 5nm away.

Anchor rattles its way up and soon it is clear that the wind had been easing down during the last hours and the narrow pathway inside Yankee Harbour is now accessible. Leaving barely 30m between the ship and the tip of long, narrow and flat Spit Point, Captain skilfully manoeuvre the ship inside the natural harbour and soon after drops anchor again and we are called for a meeting before starting the landing operations.

Soon the zodiacs drove us ashore, landing close to a try pot used by the sealers of the 18-hundreds to render the seal blubber into oil, and left behind at the beach until nowadays. Seemingly as a protesting act for such activities, a group of Elephant seals snooze right next to it. Again mostly young individuals are piling up here during their moulting period. Up in the low ridges of the hills, countless Gentoo penguins take care of their chicks. The group made its way towards de outer shores of the bay, crossing a couple of snowfields and a glacial moraine made up of big angular rocks, before reaching the spectacular spot at the foot of a glacier front, that gradually increase its height from the beach continuing along the coast. Right there, between the swell breaking at the rocky coast and the snow slopes, seven Weddell seals lay quietly, together with a few Gentoo penguins, Giant petrels and a solitary Antarctic shag. Slowly and quietly we could approach them without disturbing their rest, having great views of them and enjoying the nice surroundings. Weddell seals spend a lot of time diving to great depths (around 600 meters) for around 45 minutes each dive, therefore, between immersions they need to recover for a couple of hours, resting on the ice or on the beach. Offering us good chances to sit close by and observe them.

Then it was time to retrace our steps back to the landing beach and be picked up in time for dinner. In the meantime Europa heaves anchor and off we move about 5nm to the next landing spot scheduled for the day, and evening outing at Half Moon Island. This 1.25-mile (2km) long, crescent-shaped island that lies in the entrance to Moon Bay between Greenwich and Livingston Islands, it is only few miles from the Yankee Harbour, so we had just enough time for dinner. It was getting dark quickly and we had a limited time for landing aiming to get back aboard of Europa by 10pm. Weather, as usual was ever changing, but it was still suitable for launching zodiacs. And there was a chance to spot a macaroni penguin, a nice change from all the gentoo and chinstrap penguins which are of course also present in this landing spot, together with the buildings of the Argentinean Station Camara.

The island was also known to sealers as early as 1821, then used by whalers as well, as we could see at the beach we chose for landing, where lays a rotting

wooden boat (or dory) from that old times. Nowadays it represents a great opportunity to get some interesting photographs and many of us gave it a shot. As some of the zodiacs were still arriving with new people, we already started our short hike with those already ashore. Uphill, we first reached the first small colony of Chinstrap penguins. From up there, opens for our eyes a nice view of the Europa at anchor and the large glaciers of Livingston Island.

Continuing the hike alongside the hill, we came across a snow patch with many penguins. The landscape was wild and rugged on the island with huge glaciers filling up the horizon. A snow blizzard gave the place that extra bit of special, enigmatic feeling.

We still came across some more historical human activity from the past among the rocks and on the beach. Like remains of sealers equipment and oil barrel metal rings. Carefully avoiding Wilson storm petrel nesting slopes, we came across a chinstrap colony where a solitary Macaroni penguin stood right in the middle of it. With its glowing eyebrows, created a small spot of happy yellow colour among the black and white chinstraps and dark gloomy weather. It started snowing even harder and also getting dark. After “Macaroni photoshoot” it was time to glance over the wild landscape in front of our eyes and get back to the landing spot. With the snowfall all of the mud and guano covered rocks got more slippery, but we all managed to get back to the landing spot safely. The guides called in for zodiacs and we all transferred back to Europa. The last person stepped aboard just before 10pm. It was time for us to reflect back on the day next to a glass of chosen beverage. Happy days.

Voluntary anchor watches kept going on overnight until approximately 03:00 AM, when it was time to start our way to Deception Island. Tonight, a rather big iceberg close to the ship spiced the watches, having to keep a close look at its drifting movements.