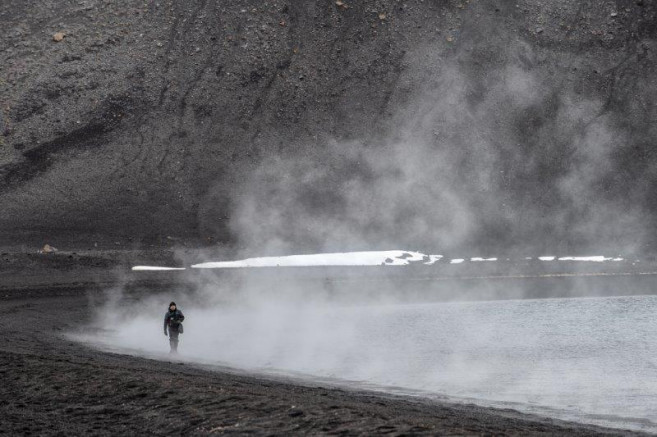 After sailing overnight off Half Moon Island, first in the last bit of the Mc Farlane Strait, then rounding the East Coast of Livingston Island and heading Southwest to Deception Island, we wake approaching the big orange cliff called Baily Head, and the tower rocks nearby, the Sewing Machine needles in the outer coasts of Deception.

Soon Europa sails into Port Foster, the bay inside Deception collapsed caldera through the only opening in the volcanic ring. The gap is called Neptune’s Bellows. In the early 19th century, the sealers gave the name to this 230m wide waterway into Deception Island because of the strong winds that often blow here. Not only is it narrow but also just under the surface Ravn Rock is hiding. Many vessels have collided with it, including the remains of one which is on the beach at the Western shores of the Bellows.

Whalers Bay, where the ghostly Hektor whaling station was settled in 1912, is located just next to the entrance of Port Foster, and this morning is receiving the visit of one of the largest ships working nowadays in Antarctica, the Norwegian Roald Amundsen with capacity for 500 passengers. We leave them enjoying this spot while we keep going for a handful of miles deeper into Port Foster towards our scheduled landing site for this morning, Pendulum Cove. There we drop anchor and without much delay, after our guides briefing, we were ready enjoy a quite special landfall where we could take a swim in its waters. It’s curious name comes from the pendulum and magnetic observations made by a British Expedition in 1828.

From our decks, we could already see the steaming flat black sandy beach, clear indication of the high water temperature flowing in the tidal area. At the background stand out the remains of the Chilean Station Pedro Aquirre Cerda, which was destroyed during the 1969 eruption. The Base was named after the President of the Republic of Chile (1938-41), who proposed the limits for the Chilean Territorial claim of Antarctica. Actually, South Shetland Islands and the Antarctic Peninsula share the claims of Argentina and United Kingdom as well. Behind its tortured relics sticking out of the volcanic ashes and loose gravels, the ground rises abruptly to the inner caldera wall which is mostly covered with glacial ice.

After landing we split in two groups, one starting a bit of walk to visit the remains of the station, while the others prefer to start figuring out the best place and way to have a warm bath on the hot springs generated by scalding water along the shoreline.

We have to have in mind that Deception Island is still considered as an active volcano, with the last eruptions being in the 70’s.

The Steam rising from the beach was boiling hot, but when mixed with the cold Antarctic water from the sea, it made for a nice comfortable temperature to bathe in. Many decide also to jump into the icy cold water and combine a cold shock with the warm bath along the shores. All an all, it was a sight to see. Europa on the bay, bodies flapping about in the water, a single penguin and a couple of Skuas intrigued by what was happening, and the guides happy that everyone was enjoying themselves and making memories of this Christmas Eve that would remain with them forever.

Warming up back on board, we just have to reposition the ship a couple of miles to Telefon Bay, for the afternoon excursion. Sun shines inviting for a pleasant outing, while we board the zodiacs to go ashore into the small bay of Gonzalez Harbour. Of coloured waters, the several linked explosion craters flooded by the sea offer calm conditions for a landfall. This area was named in honour of Professor Oscar Gonzalez-Ferran, the author of several important papers on evolution of the Deception Island volcano.

As soon as the cold morning had become warmer and even some blue skies hoover over our heads between the high clouds, now in the afternoon grey skies loaded with snowfall cross our path while we are ashore. Nevertheless a bit of a sudden change for really Antarctic weather was not going to stop us on our hikes. Two groups were about to leave in separate directions. A shorter hike over flat areas and low volcanic ridges, while e longer one was to climb to the top of Cross Hill and walk around its crater. The 160m above the sea level climb was appreciate for the ones eager to walk but also because we get getting cold and some exercise helped to warm up again. as we climb higher along the volcano narrow ridge, it became colder and windier, and by the time we all reached the top quite a blizzard blew over the mountain. Not ideal conditions to stop there but instead keep walking along the crater ridge on our way back to the landing site.

There, the zodiacs picked us up and back on board we all still got time for during our wet gear and get ready for yet another outing after an early dinner. Now, heaving anchor and sailing back towards Whalers Bay, where we plan our next visit ashore.

There, the relics of the largest whaling station operating in Antarctica during the golden age of whaling can be found. Nowadays the area is considered an Antarctic Historical Site and special rules apply to preserve the Antarctic heritage.

The Norwegian Hector Whaling station went through several periods, from the whaling, passing to be also a Navy-military base during the English Tabarin Operation in the Second World War, and afterwards being part of research facilities belonging to the British Antarctic Survey, formerly called Falkland Islands Dependencies. After the pertinent briefing from our guides, we landed straight in front of one curious artefact left behind along the beach, a large sort of floating pier used in the past for reparations of whaling vessels. A clever system that could substitute the engineering problems, time, effort and money of building an actual port and dry docking facilities. From there two groups went off to explore the area. A longer walk was offered for the ones interested on reaching a nice viewpoint over the caldera and the Bransfield Strait, while others preferred to spend the time stacking into the eeriness of the seemingly haunted remains of what is left of the whaling station.

The hike brought us along the beach and then uphill to the so called Neptune´s Window. Named by Lt. Penfold, from the British Royal Navy, following his survey of Deception Island in 1948-49, because weather and ice conditions in the approach to Neptune’s Bellows could conveniently be observed from this saddle in the caldera ridge. The story tells that from here, in 1820, the young sealer Nathaniel Palmer, was the first one who spotted unfamiliar land further to the Southwest, which would later turn out to be the Antarctic Peninsula. Others say that the continent had been sighted months earlier by Thaddeus von Bellingshausen, a scientist and explorer sailing for the Russian Czar, not in the Antarctic Peninsula but close to the Queen Maud Coast, at the Eastern side of the Weddell Sea. That was on January 27th 1820, during his expedition to the southern seas, entrusted to circumnavigate the world at the most southern latitude possible to expand the discoveries made by Captain Cook fifty years earlier.

Down below, along the flats where the whaling station lays, we walk around the buildings, tanks, and boilers that have been partially covered and melted by a mud-ash flow in 1969. The memories of the massive whaling which took place here are strangely half-buried and masked by this devastating event. Mother nature seems to try to recover from all the killing we had done here.

Several structures can be still visited, including the two crosses left of the approximately 40 Norwegian whalers buried in the first half of the 20th century. Also a couple of picturesque water-boats caught our eye. Those were used not for harpooning the whales but mostly for transporting ice for the boilers and for flensing purposes. A bit further, huge oil storage tanks, high pressure blubber boilers and several buildings are in clear decay nowadays. Comparing with other visits ashore we already did in other islands, today’s landings, including Whalers Bay seem quite desolated, and just some Gentoo and Chinstrap penguins enjoy the solitary and relatively warm beach, some Kelp gulls nest on some of the structures and ever-present Skuas look for whatever they can find along the shoreline, today showing lots of half boiled krill and salps. Strolling around in awe, stopping here and there for taking pictures wherever we turn around or new building we visit, we walk all over, crossing several melt-water streams from the snow and glaciers above the hills at the background, cutting channels throughout the flat beach. And as usual, just before 22:00h we were all back on board enjoying a wonderful Christmas Eve with a glu-wine in our hands and a good atmosphere in the bar.

Plans are to heave anchor just before 04:00h and set course towards the Antarctic Peninsula across the Bransfield Strait.

Icy coasts, icebergs, sea ice and challenging navigation await for us during the next days.

Amazing experience and unforgettable trips. Decpetion Island is the black wonder against the white of ice