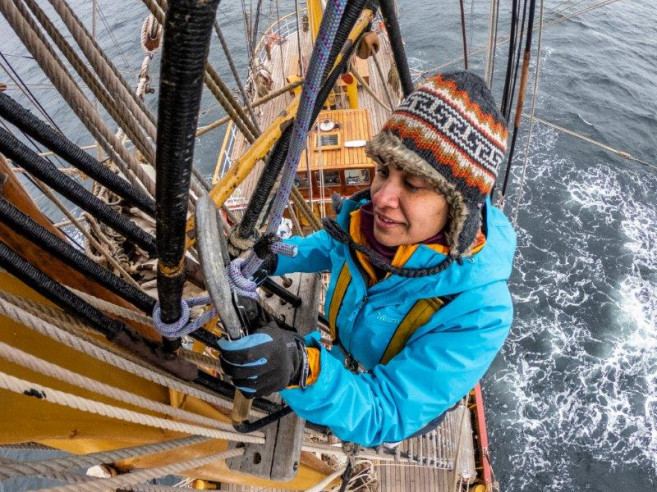 Stronger headwinds during the night made us to slow down our pace during a couple of hours. Wind and currents funnel and meet just passing Cape Froward, the southernmost tip of the continental Americas. Here two large open channels join: the continuation towards the NW of Straits of Magellan itself, and the Southbound Canal Magdalena, which joins the western part of the Strait directly to the Pacific Ocean. But it didn’t take long to resume our good speed of about 8kn once passed this area. We were heading towards the maze of channels and islands at the West entrance of the Strait of Magellan. First motoring our way along the Cockburn Channel, that actually separates the Brecknock Peninsula from Clarence and Capitán Aracena Islands, and is part of a major waterway connecting the Strait of Magellan and the Beagle Channel. In between them lay the large Tierra del Fuego Island. This graphic name was first used by Magellan, when about 500 years ago he and his fleet explored and located the waterway that connects both Atlantic and Pacific Oceans. When they first reached those remote coasts, many fires were burning close to the shorelines, lighted by the indigenous Yaghan people, reason why he named this land Tierra del Fuego (Land of Fire). All lands around were named also by him as Patagonia. Several hypothesis had been proposed trying to explain the origin for naming it like this, but the most accepted one has to do with the mythical race of the Patagones, supposed to be giants living in those latitudes and the Magellan findings of large human footprints along the beaches. Since those times, it is assumed that it comes from “pata”, (foot in english), being Patagonia the “land of the big footed”. Other expeditions along those isolated coasts, including amongst others Sir Francis Drake in 1579 and John Byron in his world circumnavigation on 1766, reported as well large native humans and giants. Leaving aside myths and legends, there was actually an ethnic group here, the Tehuelche who lived a bit further inland, and as an average they towered over the Europeans of that time.

Despite the saying that Magellan discovered the straits and other expeditions along 16th to 19th centuries explored the labyrinth of channels and fjords of the southern Patagonia, the area was already inhabited from long before. Several groups of natives spread all over the coasts, valleys and pampas all around. The ones most encountered by the European pioneers were the Yaghans, who occupied the rugged shorelines of the area, in a life based on the sea and their canoes. Some controversial datings of their small settlements and middens had given us dates up to almost 10.000 years of occupation. Quite impressive old dates if we stick to the regular scholar views of colonisation of the Americas, which state that humans first came to what is now Alaska and Canada just when the melting started after the last glacial period, about 13.000 years ago. From there they supposedly spread first through North America towards the South, expecting like this younger settlements in the most meridional areas.

Motoring through such interesting and distinguished area, we could all enjoy great views of the surroundings, with the forested hills framing some high mountains all peppered by a few picturesque glaciers. As we were not yet joining our watch system we had time enough to be on deck. The good sea conditions made better for spending the day on familiarisations with our watch system, introducing us to our duties on board too. Directions for the lookouts and helming were completed with some rope handling lessons and afterwards the always exciting climbing aloft instructions. All necessary for the next days to sail the ship all the way to Antarctica and back.

While some were practising up the rig, a small group of the local Peale’s dolphins joined us for a while. Common in the coastal waters of Southern South America and Falkland Islands, this species can’t be encountered anywhere else in the world, which always make for an interesting sighting.

The morning went by and soon it was time for a deserved lunch, while the Europa gradually started to leave behind the Straits of Magellan. Long time ago, on November 28, 1520, Magellan completed the navigation of the newly discovered inter-oceanic passage slightly northwards from where we meet the Pacific Ocean today. From then on their expedition faced the vast unknown waters that would bring them to the Pacific Islands, and eventually to circumnavigate the world for the first time. A voyage full of tragedy and accomplishment, mutiny and success, loss of ships and lives but also the attainment of a dream and a business. Their struggles with unknown passages, oceans, islands and native tribes ended up with the death of the fleet’s Captain, Ferdinand Magellan, in Philippines. From then on just one of the five ships that started the trip finished , the Victoria, under the command of Sebastián El-Cano.

For us, from now on the trip is planned in a different way, as we turn southwards to new adventures. Despite the well-known Magellan-El Cano famous undertaking five centuries ago, many other distinguished expeditions sailed those treacherous waters, like yet another great circumnavigation of the planet by Sir Francis Drake between 1577 and 1580. His voyage brought him also to the Magellan area and at the end helped to give a more accurate picture of the true geography of the world. During the course of the voyage, Drake discovered that Tierra del Fuego, the land seen to the south of the Magellan Strait, was not part of a southern continent as had been believed previously, but an archipelago. This meant that if the American continent was not connected to a southern continent, the

Pacific and the Atlantic oceans met further South. Then it should be possible to sail ships around the bottom of South America. This was the Cape Horn route, eventually discovered in 1616.

But now, with a good speed between 7 and 8kn, the Europa leaves behind those legendary lands to join the waters of the Beagle Channel. This other waterway that joins Atlantic and Pacific Oceans south of Tierra del Fuego, had to wait until 1830 to be discovered by Europeans, during the first trip to these areas of the HMS Beagle that lasted between 1826 and 1830. The expedition consisted on a survey and mapping of Tierra del Fuego surroundings, commanded by Prinkle Stokes, who committed suicide in Magellan Straits in 1828. Leaving the ship to Lt. Skyring, who afterwards appointed Robert Fitz Roy as the new Captain. He came back to the same area with the same ship in 1831 until 1836 on a second expedition that would change the way we see the world, when years later the naturalist who travelled on board, Charles Darwin, surprised the scientific community, and actually the whole society of the time, with his revolutionary ideas about natural selection and evolution.

Related to these expeditions are also many place-names of the area we sailed through today, like the scenic Seno Ladrones, where we found ourselves before dinner, training on setting sail. After all the day instructions, now it was time to start learning how to unfurl and set some of our canvas. This was our afternoon adventure once more climbing aloft and then pulling sheets and easing buntlines and clews. But 189 yers ago, while the Beagle sailed right where we were, during her first expedition, they had to face their own crusade when one of her whaleboats was stolen by the natives, thus the name of Seno Ladrones (Thieves Sound in English). Fitz Roy would spend two months scouring the coastlines of the countless islands in this western Cape Horn Region searching unsuccessfully for his lost boat. The episode ended up with him kidnapping three young natives intending to ransom them back to their relatives in exchange for his boat, a manoeuvre that was never successful.

Later on and further South another Yaghan boy was taken on board. The whole enterprise ended back bringing them back to England to be schooled and “civilised” in the European ways and religion, with the idea of returning them to their lands afterwards counting with their help with the locals and with starting a Christian Mission. That was to be during the Beagle second trip mission to the area, on a voyage where a young and enthusiastic Charles Darwin also joined.

Passing the Sound where all this story took place, by 21:00h, the Europa takes his way along the narrower O’Brien Channel, leaving the island of the same name at her starboard side. About 14 years ago, scientists from the University of Magellan in collaboration with other research centres and independent personnel developed a large scientific survey in the whole area from here, also bit further north and all the way to Cape Horn to create what is nowadays a UNESCO Biosphere Reserve, finding right in O’Brien Island what is considered the southernmost Cypress forest in the world. Here, the trees can’t grow very tall, but remain tortured and small for hundreds of years. This channel is part of the NW arm of the Beagle Channel, an area we sailed still with the last lights of the day. Some went to bed, others were around as the watch systems, at least the lookouts, already had started in the afternoon. A journey in the dimming light surrounded by pristine fjords and impressive glaciers, mountains and old grown beech forests growing on this desolated corner of the world. A place where no humans live since the native Yaghan abandoned their traditional semi nomad and canoeing way of life at the interface between the 19th and 20th centuries.