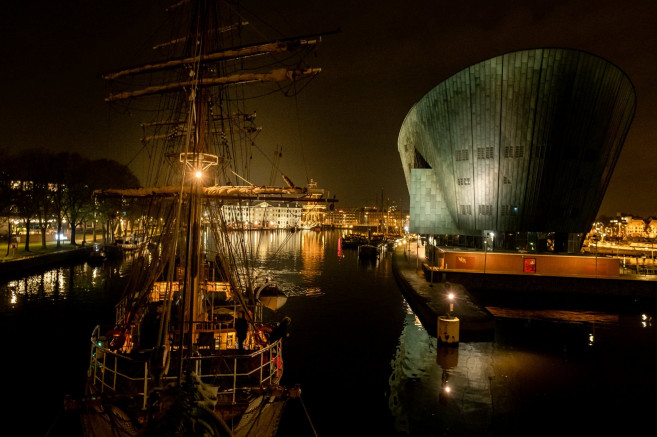 Time for moving the ship back to Zaandam has arrived. A relatively short planned shipyard period will follow the weeks that we have spent as an attraction of Het Scheepvaartmuseum. During our last day here, banners, hoses, ropes and the rest that was still connecting us to the jetty was picked up and brought on board. Including the several bikes that on one way or another had made their way to the ship during the time we have been in Netherlands. Not surprising if we think on the country’s bike culture. Two of Netherland’s features that most people first notice is the large amount of any kind of boats in the canals and coastlines plus the heaps of bicycles ashore.

Indeed, its 17 million inhabitants own about 23 million bicycles, rode in an environment friendly for their use. But nevertheless, don’t let this to fool yourself, furthermore if you come from a small village lost in a mountainous foreign country. In the flats of Netherlands, the locals of any age master the bicycle as means of transportation, doing most of their daily traveling and errands on them, but visitors often require an adaptation period while trying to pedal amongst all the native fast riders that every day take over Netherlands streets in a seemingly crazy fashion.

In summer they embrace their sweat, in winter they shudder in the cold, but bikes appear to be inseparable companions of Dutch lives all year round. Here, people seem to take seriously the quote attributed to Albert Einstein, on a letter to his son in 1930: “It is the same with people as it is with riding a bike. Only when moving can one comfortably maintain one’s balance”. For the unexperienced eyes, a balance that here seems to tip towards an allegedly mad flow of cyclists in the cities and towns of the country that seem to defy the thought of considering the bike as one of the most civilised transports…

“Get a bicycle. You will not regret it, if you live.”Mark Twain. ’Taming the bicycle’.

As a newcomer, no matter if you are riding a bike or strolling around, you will probably hear countless times the warning dings of the local bike’s bells, while trying to figure out your way through what for some resemble a maze of pedestrian sidewalks, bicycle paths, tram ways, roads and canals crisscrossed by countless bridges.

And indeed, even though all was set for our departure since the early afternoon (with the engines ready, crew prepared, maintenance projects put on hold until tomorrow, jetty cleared and bicycles stored in the main deck) it was not until late at night when one of those bridges, that give access to the inner waters of Amsterdam and its Science and Maritime Museums, was lifted allowing the Europa to make her way to Zaandam. And there, mooring lines were tied up before 03:00 AM, leaving the ship ready to start a new week of shipyard projects.