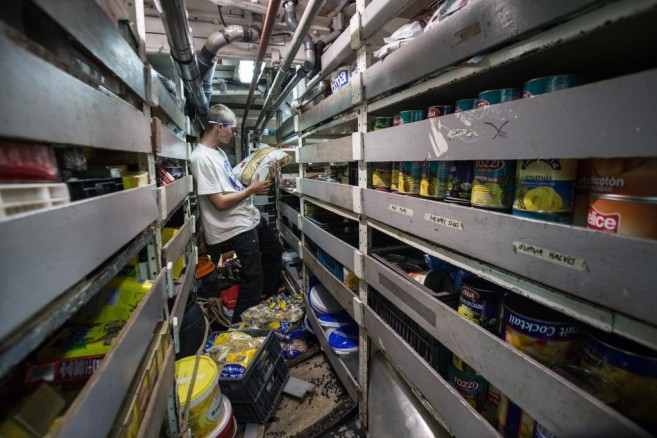 Early in the morning the wind increases and we are on the move again after the calm period we had during last couple of days. As the morning goes by, the wind increases to 14kn and with all canvas set we sail on Starboard tack, Beam reach, and using the Ghosting sailing technique we can speed up to 7.5 knots.

The origin of the term “ghosting” apparently comes from the old times when the sailing fishing trawlers were working in the English Channel and North sea. Those ships were made for fishing with a low rig so they were steady to work the nets and. When Tall ships with their high riggs come out of the fog sailing up to 5 times faster than them with the same wind, they actually looked like “fast going ghosts at sea”. They could work with the breezes that blow stronger on a height of 30 to 40 meters than on the surface. Using often also this technique, bringing the apparent wind forward. We sail like this the whole morning, until the wind starts veering again and we have to set the three Studding sails on Starboard side. We are entering areas where we can feel the strong tidal currents. The wind keeps increasing during the night, up to 24 knots from the NNW, time to take away the Studding sails, Skysails also come down together with the Flying jib, and we still sail Full and By on Starboard tack, speeding up to 9.5 to 10 knots on a 220º course. (The tide is helping us a little with the speed). While working on deck and aloft we can see the lights of Puerto Deseado city on our Starboard side, around 40 miles away, as we have been approaching the coast during last days.

Puerto Deseado (Port Desire, named after Cavendish ship) is quite an important highlight on our trip, this is the place where Schouten and Lemaire made for land, and try to clean the hull of the Hoorn putting her dry on the beach. The misfortune led to the loss of the Hoorn, as she caught fire while burning the tough growth from her hull. They salvaged the gold coins and metal items from her ashes and transferred her crew to the Eendracht. She was prepared then for heavy weather, stripping the upper decks of heavy objects they could do without, stowing them in lower decks to lower her centre of gravity and improve stability.

Today, probably the last day for the moment of calm seas and light winds, was a propitious moment to count our food stores. It is important on a trip like that, around 45 days at sea and without re-provisioning, to get the fantastic, equilibrated and nutritious diet Marianne and Ann Sophie are cooking for us, but at some point is necessary to check and do inventory of the remaining quantities of food stocks for the 41 people on board. Permanent crew has been busy with that today.

Wildlife sightings today were scarcer than other days, but a new bird species for the trip was spotted: a few Prions were flying around the ship, also some Black browed albatrosses and a solitary Royal albatross. Two huge Fin whales, the second largest whale in the planet after the Blue whale, passed by pretty close to the ship as well.