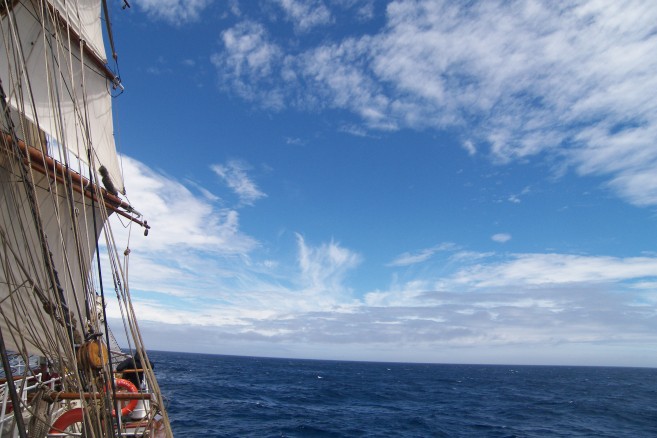 Two days ago we departed Cape Town after a ship yard period of 3,5
weeks. Lots of work has been started and completed by many hands.
Many thanks for everybody who helped us to get the job done and made it
possible that we're underway sailing at the moment. We hope to see you
all again next year for a new docking period!

Europa seems to be very pleased with the treatment she got during the
shipyard period, and likes it even better to be back in the water after
being on land for 3 weeks. An hour after departure we passed
Robbeneiland and a breeze from the East picked up. We started to set
sail and two hours later the engines were off, since then we're under
sail. Because of a small incoming low we kept quite a Westerly course to
catch the most favourable winds. This morning we wore ship and are now
heading more North. With an average of 7 knots the speed has been good.

After departure the ship got silent. Meeting the South Atlantic was not
love at first sight for everybody...but after a couple of days most of
us have gotten used to the motion of ship and sea. The sea has calmed
down a bit and Europa is now gently rolling. All possible sails are set.
More are being prepared to fly in the upcoming days.

With the company of a couple of Blackbrowed Albatrosses flying around
the ship we are on the way to St. Helena.

Helena Hamlyn, so pleased to hear your on your island. Have a very happy time & safe traveling to you & all your shipmates. Thank you to the log keeper, looking forward to reading more. Safe sailing xx

Hi Janke! Sounds blissful. Apart from meeting the not love at first sight South Atlantic! Looking forward to joining you all in Horta. Can you maybe let Penny know if she gets this that Jules (as in Toby and Jules) is joining in Horta. Never got a chance to let her know before she left Australia. Can't wait to see you all sailing in. And if Penny needs any Aussie home treats be sure to email me! Safe voyage you and crew! Can't wait! xx

Well done Janke and crew for getting the ship back up and running after such an intense maintenance period. I have an idea how it must have been the first few days after you left Capetown and really congratulate everyone on making it happen. I hope all continues to go well. Best regards to all, Trev.