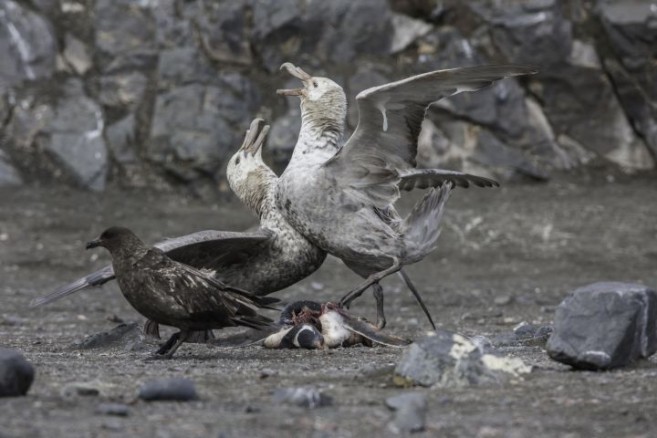 Close to Walker's Bay, we arrive at a rocky headland called Elephant Point, place for our morning activity. This is another seldom-visited place in the South Shetlands, where the Europa has never been before. Its always exciting to try something new now and then in Antarctica, where there is still space for some exploratory trips.

Scattered over the large landing area, whalebones, baleen plates and wood from old refuges can be found. But first of all we were all surprised to find large numbers of Elephant seals in different wallows all around. No wonder why the place is called Elephant Point. Another feature that rapidly caught our eye is the amount of grassy slopes and moss patches at the background of the seashore. Here, the grass Deschampsia Antarctica flourishes more profusely than in any other place we will visit on our trip.

Before lunch we were all on board and the engine roars to bring us to out next place to visit, Hannah Point, just a few miles Eastwards following the rugged and glaciated South coast of Livingston Island. On our way several Humpback whales are spotted and we can spare some time trying to drift closer to them. Hannah Point was named after the sealing vessel Hannah of Liverpool, which wrecked there in 1820. This site is a microcosm of Antarctic wildlife, and in fact is know as “Antarctica in a nutshell”. The landing takes place on a basaltic cobble beach, home of countless Gentoo and Chinstrap penguins.

From the landing site we walked up a hill to a large Chinstrap penguin colony. As we could see before, these species shows a different behaviour, and the youngsters just sit next to where they were born waiting for the adults to come back and feed them, instead of racing everywhere. From that spot we continued the excursion with the people that wanted a bit more hiking, climbing up the moraine of the large glacier that offers its ice to Walkers Bay waters. From high up there we can enjoy an incomparable view eventhough some fog and low clouds started to appear. The steep way down was straight to the glacier itself, where we walk around on the ice enjoying the great geological erosion features on its surface. A layer of ash from a former eruption of the neighbour volcano Deception Island is exposed now in the icy surface, creating inspiring textures and shapes for the special amusement of the photographers amongst us.