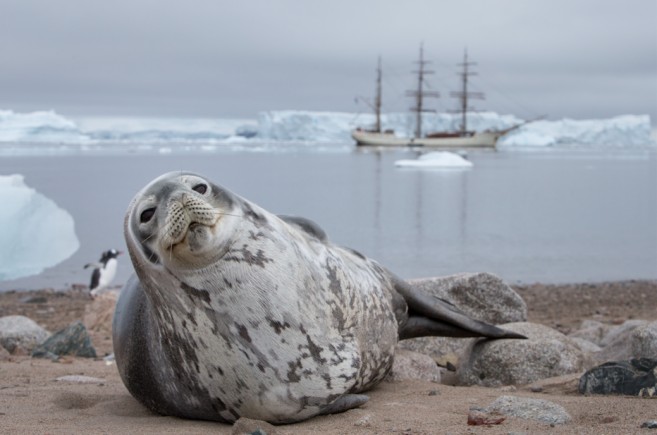 We are sailing into the Nelson strait – the strait between Robert Island and Nelson Island. On both sides we see large, snow covered glaciers, some of them ending in bright blue fronts coming down to the ocean. We sail Southwards through the strait, until it is time to take away the sails and put on the engine. We are now heading East, and later more North, into Maxwell bay. We are here to bring Mateo to the Chilean base at King George Island. Also, we will do our first landing.

Just after lunch the anchor is dropped. An impressive, unfamiliar sound we haven´t heard yet, but will get used to very soon. After lunch Blacky and Grey, our dear zodiacs, are launched, and we start getting on land. It is not entirely calm, but for a first landing everything goes very smooth. We are landing in the busiest science hub of the South Shetlands. Argentine, Brazil, Chile, China, Poland, Russia, Uruguay and South Korea all run a year round base here, and there are also several summer only bases. Barracks, boats, trucks, airplanes, generators, wifi, cars, scooters, snow cats, people, and even two churches are to be seen. With all of these things fresh in our urban memory, most of us choose to focus on the four chinstrap penguins on shore, while we are waiting for everyone to make it to the landing beach.

Our walk starts on a road. There is in fact 20 km of roads here, connecting the different stations to each other and the airstrip. A rarity this far South, but for us still normal. We walk up to the airstrip – used by the different bases, but also by tourists that decide to skip the Drake and miss out on this unique wild ocean. At the airstrip we leave the road and make our muddy and snowy way down to the western shore of the Fildes Peninsula. Suddenly we are in quite a different landscape. With the bases and buildings behind us, we are now looking at the typical barren southern landscape, still half covered in snow.

Despite it being made up mostly of rocks and snow, it is quite green. There are plenty of mosses here, mainly the long haired pale green usnea. Down on the shore we see a pile of Elephant seals. They are laying here while they are molting, which is also the reason why they all have different shades of grey and brown. It are mostly young ones or sub adults. These are rather small ones, but as the first seals we encounter, they appear huge and it is hard to imagine that they can dive down to 2000 m to feed. A bit further we see some lonely seals – smaller, slimmer and with a lighter, dotted coat.Their faces are almost cat like, much smaller then the large eyed elephant seals. They appear to be smiling.

So nice to read your adventures and to follow the Ship. A late Happy New Year specially for Wilbert and Suzanne. Looking forward fot the next update

I'm really enjoying tracking your journey from my warm, dry armchair. It is fascinating

Also following the ship's progress avidly! Say Happy New Year to our son Ed Moore & friends and hope they are having a really great time!