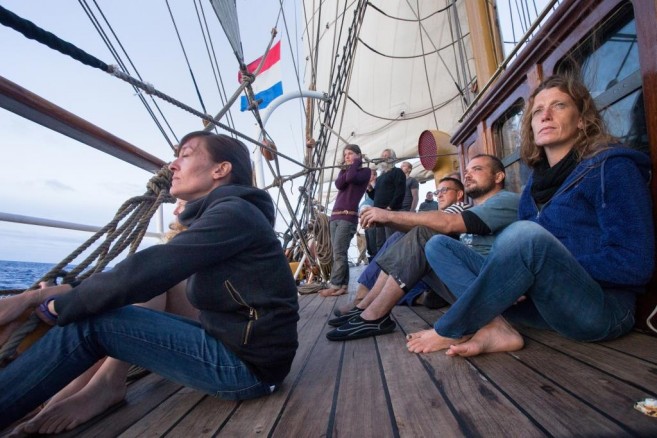 During last afternoon we experienced the last hours of rough weather, swell, wind and sailing close hold on Port tack, heeling heavily to Starboard side.

From then on the wind decreases, to a point when during the night we can set all remaining canvas, so Flying jib and Skysails are hoisted. With SE-erly winds of 8 to 9 knots from the SE, with a tendency to back more to the East. Our speed is between 3 to 4 knots on a WSW course, trying to slowly get closer to the southern Brazilian coast, under calm seas with a bit of remaining long swell from the last days wind, and sunshine in blue skies. Birdlife around the ship is scarcer than yesterday, but still Black browed and Yellow nosed albatrosses are sighted, together with a Spectacled petrel. Later on an Atlantic petrel also shows up.

But more interestingly a group of whales are spotted in the morning, moving steadily towards the South. Some of them dive and show their flukes at the distance. After trying to identify them for a while, following their movements with the binoculars, finally some of the key features of the Sperm whales can be observed: bushy blow, around 45º directed towards the left of the body, lack of a proper dorsal fin and the characteristic shape of the fluke. They were a group of females and young individuals, swimming and diving on those deep waters of around 3500 m deep, 160 nm away from the Continental shelf. It is quite characteristic that this species moves around offshore deep waters, and furthermore as they were moving South, in this area the Brazil current helps them on their way.

Sperm whales are the largest of the toothed whales, and an animal of extremes, diving deeper and longer than any other whale, with a world ocean range of distribution on ice free waters. Groups of females with their youngsters are the most common sights, as the males abandon those groups when they are around 6 years old, forming small groups and eventually end up dispersing, as they get older. Other wildlife surprises of the day are several turtles that are spotted swimming Southwards with the Brazil current, probably Loggerhead turtles.

In the evening, we still enjoy a nice breeze and good sailing conditions, and the crew off-watch also takes the chance to enjoy for a while on deck, having a beer or playing music. Katelinn and Megan are both very skilful violin players and from time to time we can really enjoy some good playing on deck.

We are sailing in quite open waters far way from any news and connections to the outer world, that is one of the reasons for many of us to be sailors or spend long periods at sea, but even like this we have some connection via mail with the rest of the world, and Saturday the sad new reached us about a terrorist attack in France. The Captain decided to pay a tribute to the victims today as it has been done in Europe, respecting a few minutes of silence on board during sunset, lowering our Dutch flag to half-mast.

During the night the wind increases and backs to the NE, we brace more square and take away some canvas, keeping our Sw-ly course.

i love your blog and i think its going to my favorite!!i love viagra and cialis too! ddadbdeagcccfkfd

I'm not sure exactly why but this weblog is loading very slow for me. Is anyone else having this problem or is it a problem on my end? I'll check back later and see if the problem still exists. dddbeabaceebdkeb

Hello my family member! I want to say that this article is amazing, great written and come with almost all significant infos. Id like to peer extra posts like this . keekdbkdcdgddbdb