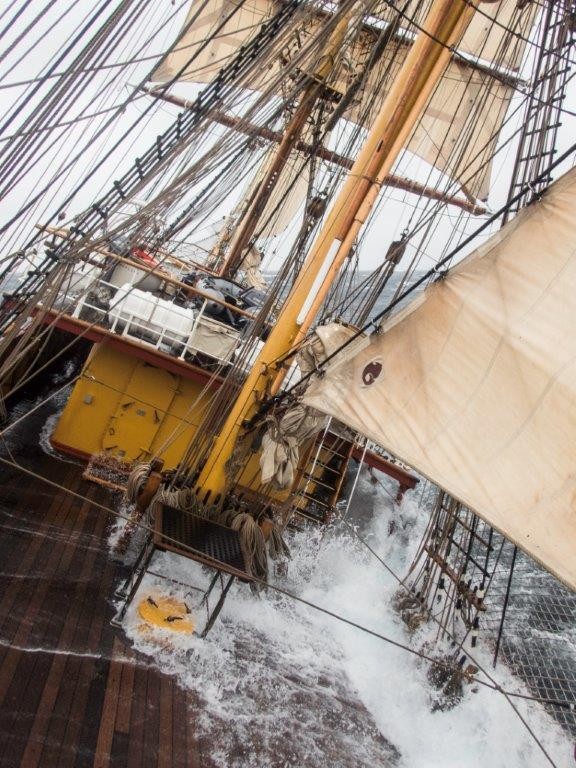 One thing has always bothered me about the itinerary for this voyage. The old windjammers used the Westerlies of Roaring Forties and Furious Fifties to travel because they provided an efficient and reliable way to travel from West to East. But they are far from accommodating for East to West travel, and in the days of the Nitrate trade there are many stories of these ships taking several days or weeks to crawl around the Horn against these Westerlies to collect a cargo from Chile. The boats doing the Grain trade from South Australia to Europe would take the long route downwind via the dangers of Cape Horn, and not the much shorter upwind option via Cape Town.

Square riggers, for all their romantic charms, were not great boats for going upwind.

So I couldn’t help noticing on the itinerary that we travel from South Georgia to Antarctica, and that South Georgia is well to the East of the Antarctic Peninsula. This means we need to go against the Roaring Forties, Furious Fifties and if the ice permits, the Screaming Sixties. This seems on the face of it to be a bad idea, and one which the old-timers would dismiss with contempt.

However, the Europa has done this before so it must be possible, and we wanted to see South Georgia. Maybe the Europa could actually point higher than the average Windjammer. Maybe the joys of the Westerlies was overstated. Maybe there was a local variation here which makes all the difference. Maybe the old-timers were just plain wrong.

We signed up, and a year later we arrived at South Georgia. Having discovered on the trip down from Montevideo that the Roaring Forties are not that reliable after all when you want them to sail South-East, but made up for it by being nice and strong and reliable when we wanted to use the Zodiacs for landings which needed calm seas. Still, if they weren’t favourable for sailing South-East, they would be fine for going South-West, which is where we wanted to go next.

On leaving South Georgia the forecast was not great - as any student of the history of sailing would have predicted, the Westerlies were predicted to be reliably Roaring and Furiously Screaming. There was a glimmer of hope - they might be more North-Westerlies that Westerlies, and that would allow us to claw some distance West. So we left the land, and set up to go close hauled on to starboard tack for the foreseeable future. At least it meant that we would have right of way over all vessels - motor or sail - that we happened across in these crowded waters.

We quickly realised how spoilt we had been in South Georgia, with the boat being in sheltered anchorages on an even keel, and motoring between landings. Showering where the water actually reached our bodies and feet, and didn’t flow straight to the nearest bulkhead instead. Sleeping in the middle of the bunk. Carrying soup from the galley without worrying about whether any of it will actually make it to the table.

Now the lean is back, and the boat is pounding into the seas adding some nice lurches to the general fun. Plates are sliding, knives and forks are bolting for the freedom of the floor, and the breakfast juice jugs show impossibly angled contents.

There is no respite in sight - Eric the Explorer has apparently never sailed into the edge of the pack ice this far East, and the master plan is to keep sailing South until he rectifies this and then do a 180 and head North until the wind changes enough to let us go South West again. Presumably to the pack ice again.

Heading North will be dispiriting, but at least it will give us a change to live on the other angle for a while.