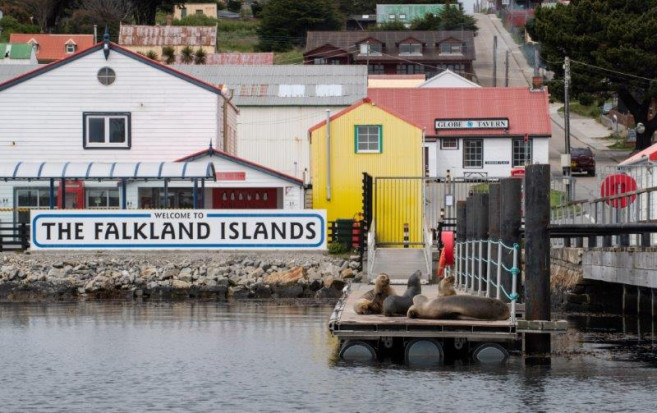 A good sailing night brought us from Pebble Island all the way to the Northeast corner of Eastern Falklands. On the way first we left at our Starboardside Falkland Sound, which separates the two main islands, afterwards we braced sharper to come up around Cape Dolphin, and from then on we kept sailing under all our canvas with the exception of the Skysails, Upper Staysails and Flying Jib until reaching Volunteer Point, where we were planning a landing later on during the day. But the steady WSW-ly winds up to Force 4, combined with the large swell and surge at the long sandy beach of Volunteer, made for keep going on our way to Port Stanley. The wide stretch of white sand beach that identify this area is home for a modest King penguin rookery, but nevertheless is the largest in the Islands, counting up to a thousand of them. But is also famous for representing a tough zodiac landing in any weather that is not windless and in gentle seas.

During the outstanding sailing hours in the night, unfortunately our Mizzen Top Staysail ripped one of its seems and had to be un-bended and lowered on deck for repairing, once at anchor at Stanley later on.

Once we made the decision to continue straight to town, we started to take sails away and furl; and by the time we enter Port William the Europa has to deal with 25 to 30kn of headwinds, making her way under both engines. Nevertheless, about 08:30h we made it to the narrows that lead to Stanley Harbour, the inner sheltered and large bay on the Southwest of Port William.

Just before we got through a large Cruise Ship was scheduled today for a visit to Stanley, but due to the adverse winds and weather they decided not to spend the day here. Good news for us brought by today’s bad weather… the town will not be crowded with thousands of tourists.

There, and with good views of the whole settlement, both our anchors went down to properly hold our ground. After hearing them rattling down, we were all eager to set foot ashore at the capital town of the Falklands. But before, we had to wait until the ship was cleared by the local authorities. It didn’t take long until we were allowed ashore. Crew and Guides had come up with a schedule for the Zodiac shuttles during the rest of the day. Tomorrow the ship will act as a Bed and Breakfast floating platform, but for today still we could have the chance for all the meals on board, or choose to try some local dishes ashore.

During the shuttles we welcomed on board a new Voyage Crew, joining us here for the rest of the trip to Punta Arenas. Soon we will rejoin the Magellan’s historical trip of discovery, but before that we still have a couple of days to spend in Stanley a a handful more visiting some notable spots in East Falklands.

Greeting us to town just at the tip of the floating jetty used to disembark and embark the zodiacs at Stanley for almost the entire day a couple of Sea lions rested, not paying much attention to our shuttles back and forth the city.

Capital of the Falklands, Stanley is a colourful settlement displaying brightly painted buildings. Many gathered first at the Visitor’s centre, right at the port, where some books, stamps and souvenirs could be found, together with the much coveted for many internet access. From there everybody spread out for a few hours or the rest of the day. Some visited the local shops and pubs, others preferred a walk along the shores of the bay, passing by a couple of shipwrecks on their way, including the magnificent old iron barque Lady Elizabeth, Stanley most dramatic shipwreck. Her full 68m hull lays in the shallows close to the beach. Launched in 1879 she is a good example of the old sea going bulk-carriers, that got into trouble while rounding the Horn in 1913, finding her final place of rest here.

There are also several memorials along the waterfront, being the most visited one the 1982 Falklands War Memorial and further along, the 1914 Battle of the Falklands Memorial, dedicated to one of the last great naval encounters during WWI.

In town, the picturesque church stands out. Christ Church Cathedral welcome the visitors with its characteristic Whalebone Arch, built in 1933 from the jawbones of two Blue whales, 41 years after the church opened its doors.

Leaving some visits and shopping for tomorrow, we returned on board to spend the night, thinking on new activities to do ashore during the day.