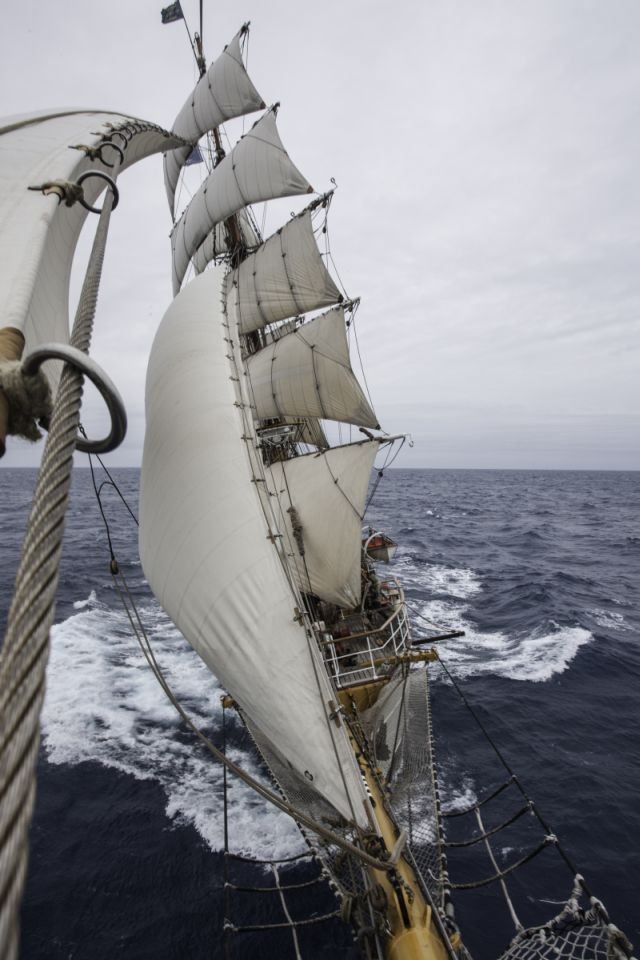 Dawn came with a wind change, backing and becoming SW-ly. It kept blowing at around 30kn, with stronger gusts during several small squalls that crossed our path.

Just a few high clouds garlanded the sky, but those several little squalls that passed by, left behind few drops of rain. With this backing wind we brace squarer, spread our fore course with whisker poles set on both sides (“polarize” the fore course in crew-speak) and take staysails away and furl them. At times Europa starts rolling heavily as she rides big waves sailing downwind. Our course is 045º, keeping a speed close to 8kn. As the hours pass, the wind decreases and by lunchtime it is blowing at around 20kn, still from a south-westerly direction, with our speed around 7kn. The watertight doors to deck were still closed until then. Afterwards the wind drops even more and the captain asked to set the fore royal. In the meantime the deck ventilation inlets and the watertight door leading indoors to the aft section are opened again.

The weather was good today and the atmospheric pressure was rising. Water and air temperatures also climbed to over 15º, making the work on deck more comfortable than dealing with the freezing cold that we were recently accustomed to. Ongoing maintenance projects keep in progress on deck, mostly to prepare everything for Cape Town’s dry docking period for the Europa. In the afternoon all went pretty much the same until just before dinner. Then, after three days of spectacular sailing, the engines are started again to keep our speed close to 7kn.

The low pressure system that has been pushing us fast forward with its wild wind and swell has already passed and we have come under the influence of a high pressure ridge. Then Jordi gave a general briefing about the island, its wildlife and inhabitants, leaving for tomorrow Eduardo’s explanations about the history of discovery and colonization. Once our informative meeting is finished, we are called on deck to brace slightly sharper on starboard tack and set the main royal, upper and middle staysails and outer jib. In dying winds, decreasing to about 10kn and becoming southerly, Europa keeps motorsailing with almost all her canvas set on a 045º course at 6 to 7 kn.

The lecture program today was left in the hands of Eduardo in the morning and our fellow traveller Annette. A couple of days ago, our guide-astronomer Eduardo started a series of lectures about the Universe. During his first lecture, he described the characteristics of the Solar System, namely the 8 planets and the comets and asteroids. Using up-to-date images of the objects of our Solar System, he provided information about the sizes, the distances and the major features of each planet. During the lecture there was also a discussion about the features of a few of the largest moons of the planets Jupiter and Saturn. For the case of the planet Jupiter, its two moons Io and Europa have attracted scientific interest since the first one exhibits active volcanism while the second may harbour an ocean of liquid water underneath its icy shell. For the case of Saturn, its largest moon, Titan, offers a unique environment similar to the one our planet had millions of years ago, when our planet still had its original atmosphere with large quantities of methane.

In his second lecture, Eduardo described the life cycles of stars and the distances at which stars lie in the sky. He reviewed the end points of stellar evolution and the distribution of stars in our Galaxy as well as the shape and properties of the Galaxy where we live. In the final chapter of the Universe series, Eduardo describes the largest structures in the universe: galaxies, groups of galaxies and beyond groups of galaxies. It is here where we reflect about the largest structures we can encounter in our Universe the clusters of galaxies, and is where we try to make a big picture of all this data together.

Later on Annette Seifert, gave a small presentation about one voyage she undertook on board a voyaging Waka. Annette comes from New Zealand and she has shown interest in traditional navigation. The term Waka, is used to describe Māori watercraft, usually canoes ranging in size from small, unornamented canoes used for fishing and river travel, to large canoes up to 40 meters. In her talk, Anette described how she had the chance to participate in the project called in Maori "Te Mana o Te Moana" which can be translated to English as The Voyage of the Ocean (Pacific). For this project, 7 canoes crossed the Pacific Ocean from San Diego California to Tahiti, via Cabo San Lucas (Mexico), Cocos Island (Costa Rica), The Galapagos Islands (Ecuador) and Tahiti. Her trip took the team 4 months and during that time they covered up to 6000 nautical miles. The names (in Maori) of the ships were Hine Moana, Uto ni Yalo, Maruman Atua, Gaualofa and Hanui. The trip was made in 2014 and after the waka fleet reached Tahiti, they traveled around the pacific for 2 more years finishing in the Solomon Islands very recently.