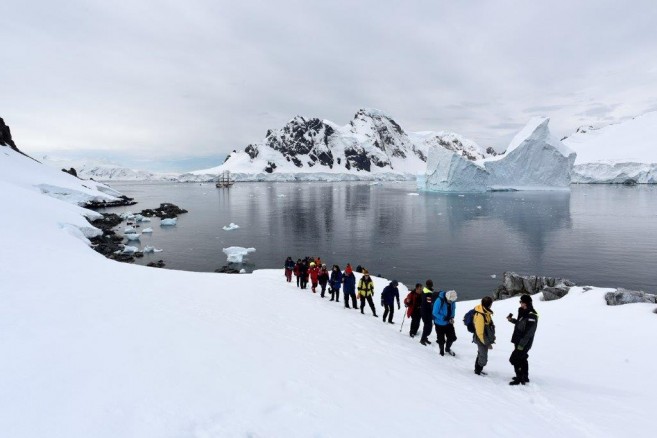 The permanent crew works in shifts of 6 hours on, 6 hours off. Today, the weather joined the watch system.

08:00
It has been bright and calm for many hours now. Humpback whales around the ship all night. Feeding, slapping flippers and tales, even breaching. Now the wind starts to pick up. Fast. It is still quite ok as we move towards the Governoren shipwreck – as we arrive, it no longer is. The wind is gusting down the mountains, water is blown of the waves. We turn the ship – it is clear it is not a good idea to try and have a closer look at the ship that over a 100 years ago was ran aground here on purpose. It was burning at that time  –  and grounding her the only way to save  the crew and barrels of oil. We are not burning. We decide to move out of the bay and try to have a look by zodiac. The wind is still picking up. We gather on deck – packed in our waterproof gear, life vests on – list ready - zodiac lowered. Wind still picking up. Grey is rocking next to the ship. Gerhard and Sarah decide to go for a little scouting first – zodiac still rocking. Conditions on the water seem to be ok. Wet but fine. How to get in the zodiac a question mark. Wind picking up. The zodiac disappears behind the small island. Conditions are calm there. They appear at the other side. Waves splashing over on the way back. Which is fun in a drysuit – but less so without. Wind picking up – gusts of 38 knot. We have passed our general zodiac operation limit. Attempt to reach Governoren is declared unsafe.

14:00
Sea like a mirror, Europa drifting in Orne Harbour. Enormous iceberg in the bay – almost like a glacier. Leopard seals on ice. Bright sunshine – no wind at all. Sarah dares to announce that it is very close to sure that we will be able to make this landing. And we do. The zodiac transfer is like a cruise – ice, steep mountain sides, glaciers, blue sky, sunshine and the familiar smell of penguins. There we are: we step on the continent. Even though all islands are part of Antarctica, and just separated by some water, even though we don´t  care about it at all – just in case the wind would not calm down, which still seemed very likely this morning – even though it really does not make any difference –– it is quite something to set foot on the continent. Climbing up the hill we strip down to our last layer of merino wool. Still sweating. We look out over Gerlache strait on one side – down to Orne harbour at the other. The ship very small compared to the enormous iceberg. We can hear the blow of the whales down in de Gerlache strait.  Watch the chinstrap penguins walking up the hill too. All is calm. And warm.

Impossible to remember what 38 knots of wind feels like – if water can be blown off its own waves –  if you can have the feeling of not having enough clothes on.

Hi Sarah Thanks for giving us some lovely snapshots of your opportunities, whatever the weather and yes, patience and timing are universal qualities where nature often trumps. Great it worked out for you all.

Wonderful blogs Sarah, so excited to see not 1 but 2. Keep them coming!