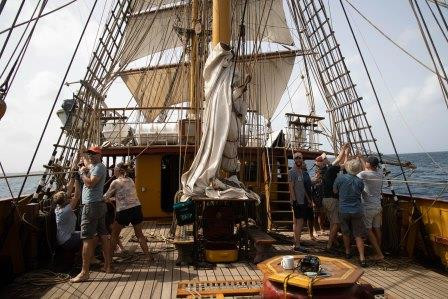 Previously I mentioned that the crew has set out to master the Spanish language; however, a more pressing matter is learning the language the crew is speaking.
While they claim to speak English, it can better be defined as “Sailor”, as their jargon is unique and unlike anything I have encountered on land.

Some members of the voyage crew have dedicated themselves to learning the names of the lines and their locations.
I think we all feel some sort of pride when we remember a new line, but then the next step is to also know what to do with the lines.
Some can by now comprehend theinstructions, often given in “Sailor”.
Yet outside these select few, the majority of us are on a slower learning curve.

This leads to humorous interactions as the permanent crew is ready and the learned crewmen run to their stations meanwhile the rest of us stare blankly at the 240 ropes hanging from above.
Distractions arise easily as crew members are caught in chatty conversation standing around lines that need to be pulled.

This occurs to the occasional impatience of the permanent crew as many tasks must be completed in quick succession of one another.
However, do not worry, they are always very kind when we have no clue what is going on or make mistakes.

An additional side effect of sail handling is the vast quantity of rope which accumulates on the deck.
These piles of tangled rope have come to be known among the crew as the “spaghetti monster.”
With an overwhelming number of ropes to be sorted it has become necessary to learn how to properly stow the ropes and keep the spaghetti monster at bay.

At first, the arrival of the spaghetti monster was overwhelming but I can proudly inform you almost all of us have become worthy warriors who can swiftly defeat the chaos of lines on deck.
We are getting more comfortable with sailing, but also on the ship.
We now understand the routine, where we can find things and have settled in.
Voyagers are getting to know the members of their shift better and conversations are slowly going more in depth.
The adrenaline levels have been falling and it is not an uncommon sight anymore to see people taking naps all over the ship.
It is also not uncommon to see a book on their lap which they were attempting to read.
We have found peace.

And occasionally,  adrenaline levels rise again, when we climb.
Almost everyone has attended climbing instructions and some can be regularly found somewhere in the masts helping out by furling sails or assisting in maintenance tasks.
But we also go up for fun; to get a good view and shoot some nice photos.

While we focussed our attention on learning to sail, we made speed towards Cape Verde.
After having no land in sight for a week the lookout was finally able to report “land ahoy” to the skipper on deck.
What began as a dot on the horizon slowly grew into a long chain of barren islands.
We dropped anchor off the coast and spent the afternoonswimming beside the ship.

Standing seven meters above the sea, the bowsprit of the ship provided the perfect high dive.
The more advanced swimmers among the crew were able to wow us with acrobatics and impressive dives, while the rest competed in cannonball and belly flop competitions.
After our afternoon on the water, we set the sails and turned towards the open sea.
The evening concluded with birthday party for our crewmate Sarah as we watched the islands sink back into the horizon.