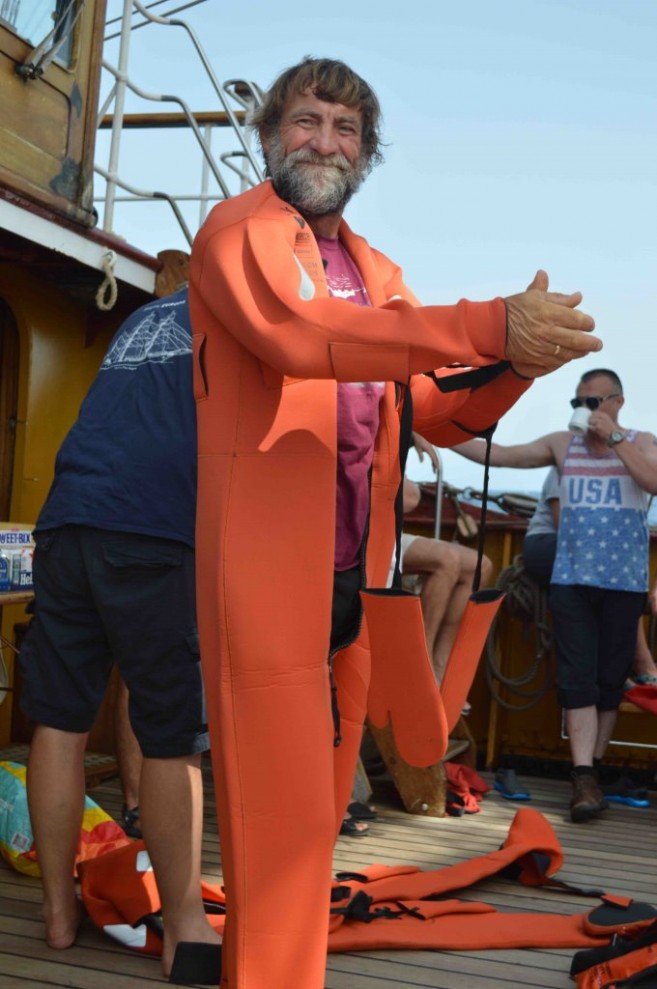 6 days ago we left Sal. With favourable winds the first 24 hours we sailed in between the islands. Finally the last land disappeared behind the horizon and all on board knew that no land is to be seen for many days. Phones were put on flight mode or switched of and then we were in our own small world on the big ocean.

The wind has been on and off in force and the direction varying between East and North, mainly being NNE. A perfect wind to set the stuns'ls, next to almost all other sails, and leave them there till last night. In the daytime it was clear that we were in the tropics. From sunrise to sunset the temperature was high, the sun burning and the water temperature rose quickly up till a 29 degrees now.

On Sal just a few new voyage crew joined, the other 28 all stayed on board from earlier in the trip. After departure the new voyage crew got to learn the basics. The others are very helpful in teaching and helping them out. Next to lectures, by permanent and voyage crew on a great variations of topics, drills are part of the weekly routine. It was fun, and a bit warm and sweaty, to get all immersion suits out during an abandon ship drill and have everybody try a suit on. A good exercise for everybody. With lots of laughing to see fellow travellers walking around as teletubbies.

At the moment of writing we just passed the first vessel in days. A fishing vessel with workinglights so bright that no other navigation lights could be discovered. We guess it's a long liner, but without AIS and no name visible the vessel stays a mysterious bright glow in the dark. The lookout was extra sharp to see if we could detect buoys with stroboscope lights around the ship, luckily we encountered none.

Last night the sky was filled with squalls and for the first time since departing the Netherlands we had rain that lasted till the morning. The sky was filled all night with lightning and sometimes thunder could be heard. Only at the end of the morning the sky cleared. Till noon there was wind to sail with. The direction and force changed often and kept everybody busy. Good fun!! Just before lunch the wind died and after a "refreshing" swim stop we went from sails to engine.

Hopefully the weather forecast is right and the wind will return soon from the SE. For the moment the lightning is visible but far away. We keep on sailing on a southern course, looking forward to meet the favourable winds. And of course to cross the equator with a ship full pollywogs...;-)

Janke - A dressman from Terschelling! Nice to see Sjoerd dressed like ....? Hope you never need this suit. Have a good tour. Once I will return. Love from Monika

Thank you Janke. Wish I was on board !