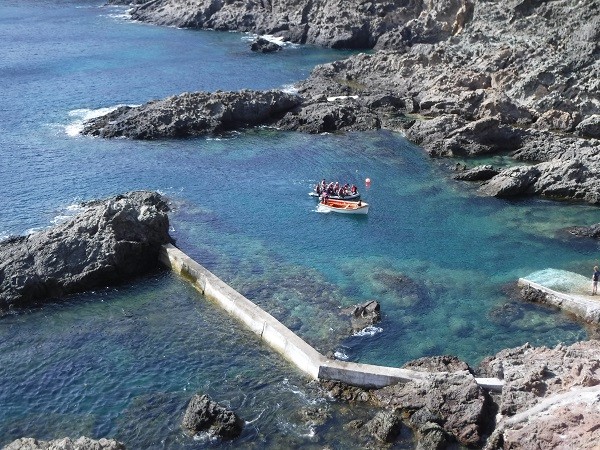 Going ahead of schedule on the September 24th, we landed at Selvagem
Grande, a Portuguese island located between Madeira and the Canaries.
Being of volcanic origin, it's otherworldy and almost deserted. If it
weren't for regular staff - two marine police officers, two rangers and
a mechanic - with their dog Selvagem, only wildlife was to be found on
the island. Attempts were made to colonize the island centuries ago, but
the lack of water made the endeavour unsuccessful.

Regular staff stay at the island for periods of up to 15 days.
Biologists may also be working on the island, but aren't always present.
Hence, rangers help biologists in surveying the island. They may do
technical work such as blood sampling or biometric studies, among other.
Man-made structures are limited to staff houses and landing facilities,
apart from the walls and the wells built during the colonization attempt.

Despite being a somewhat remote island, visitors are accepted and can
use a barbecue facility upon requesting for permission.

Being the only Portuguese person on board, I was asked to act as a
translator and help facilitate the communication between the EUROPA crew
and the island staff. We were suggested to trek the island on an one
hour tour, guided by one of the rangers.

While walking on partly steep and small paths, which were delimited by
volcanic stones, we experienced breathtaking views of cliffs, bays and
volcanic peaks.

There are no trees on the island. Fauna in Selvagem Grande is limited to
sheerwater birds, lizards and geccoes.

All in all, this was an experience which seemed to have happened far
from the European continent. Having EUROPA laid anchor close to a remote
island and having gone ashore on small rubber boats, it somewhat
reminded me of my trip to Antarctica in 2006.

Going to Selvagem Grande was a big and delightful surprise, and I feel
thankful to the Bark EUROPA crew for such a wonderful experience.