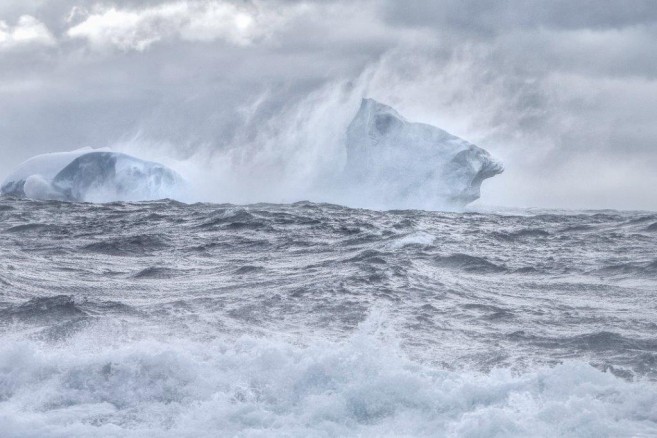 Heavy snowfall in the early morning blanketed our decks and rig, while the yards were braced squarer and we strike some sails. Wind became more N-ly, blowing at 20 to 23kn. Main Course, Fore Top Mast Staysail and Deckzbabber are taken down, while engines roar helping us to reach speeds up to 10kn. After a period of variable winds, around 06:00h Fore Top Mast Staysail is set again, and finally the engines are turned off, we sail again with varying speed between 6 and 3kn, but enough for the moment as we think on reaching Elephant Island by the evening.

Gradually our speed decreases until we find ourselves barely moving, mostly drifting on windless conditions at between 1 to 2kn. The centre of the Low Pressure system that has been giving us W-ly and N-ly winds during yesterday and today was just passing over us. Time for waiting, wind-shift was expected to come at any moment, when the eye of the depression pass by and the back side of it will give us S-ly winds. And so it happened, suddenly and will full force. In the afternoon, as we have the first glimpse of land after spending last few days at sea, raging winds over 40 to 45kn hit us as we approach the north coast of Elephant Island. All permanent crew is called on deck to strike sails and furl under wild conditions. Just the four Top Sails are left, Inner Jib, Fore Top Mast Staysail, Aap and Spanker. At that point we find ourselves about 15nm from the island, battered by big swell and gale force winds. For the moment we go a bit further West seeking for a bit of shelter in case Elephant can provide some.

Growlers are seen closeby and Icebergs beaten by the swell that splash water over them. All we can see from the forbidding Elephant Island are glacier-covered peaks, ice cliffs and sheer rocky faces, likewise on all the islands of this small archipelago. The wind didn’t decrease in a while, sea spray flies over the Europa and the waves crash against our hull, washing the decks.

Later on we needed to take away the Upper Top sails as well, again on gusting winds over 40kn. And another time both permanent crew watches are called for the operation. From then on we just keep lower Top Sails, Fore Top mast Staysail, Inner Jib, Aap and Spanker. On calming conditions closer to land, we strike lower Topsails and furl them, changing to Starboard tack to approach the rugged coast.

Again, despite the inclement sea conditions and the heeling and pitching on the swell,  life on board keeps going on flawlessly thanks to the effort of the deck crew but not forgetting our lovely galley team, Marianne, Sasha and Jonna, in charge of cooking and basically all what happens indoors Europa, to keep us well fed and comfortable. Always keeping an eye on the well assorted buffets for breakfast and lunch, and delighting us with their different creations for every dinner.

Still facing strong winds and high seas we get closer to land. Quite a spectacular arrival to Point Wild, proven to be quite wild itself! eventhough it received its name from Frank Wild, right hand of Shackleton in his attempt and failure of the Imperial Trans-antarctic Expedition (1914-17), that ended up writing one of the most compelling stories of human endurance and survival in Antarctic latitudes.

After countless struggles in the Weddell Sea pack ice, this was the jumping-off spot for Worsley, Shackleton and four of his men in the lifeboat James Caird.  They successfully negotiated the 800 nm passage to South Georgia, one of the most incredible achievements ever done in a boat of those characteristics, with barely any navigation tools, equipment, food or water with them. Shackleton ultimately returned to rescue the 22 men stranded for over four months at this rugged location.

Admiring the terrifying views of the swell crashing against the coast and its threatening stormy shores, we can imagine the mixed feelings of relieve and overwhelming fear of Shackleton’s party once they finally spotted land and got closer to Elephant, just to realise its hostile nature. It had been over a year and half surviving on the sea ice after the lost of their ship, just to encounter great difficulties to set foot here. When finally the expedition could reach the reduced beach of this rocky point, the men boiled up water for tea and commenced hunting penguins and seals. After the gruelling life on the ice and the sailing through the iceberg filled waters surrounding Elephant Island, the men finally had fresh meat to replenish themselves. Ernest Shackleton wrote in his journal that night, “After months of want and hunger, we suddenly found ourselves able to have meals fit for the gods, and with appetites the gods might have envied.”

It is hard to imagine how human beings impelled by the urge of living could survive for such a long time on such a terrible, desolate, rough and at the same time stunning  place. From here, the ship “Yelcho” under the command of Piloto Pardo, rescued them in August 1916. A sculpture of his bust commemorates the heroic feat.

Until last minute we were not sure if it was going to be possible to drop anchor and spend the night at Point Wild, or just drift overnight seeking for shelter from the S-ly strong winds along the North coast of the island. As we get closer to Point Wind we realise that the swell is too big to safely anchor. Captain Klaas gave us the chance to have a closer look at the area before getting a bit further offshore to spend the next few hours. The wind is forecasted to ease down in the early morning, then will be moment to start our sail around Cape Vallentine to the southern shores of the island, and from there set sail towards Antarctica.

Everybody gathers on deck to enjoy the view. The scenery from Europa’s decks is astounding, as the late sunlight comes through the thick clouds, the area unfold its rough beauty for us. Furness Glacier calves along the bay between the sheer cliffs of Cape Belsham and Point Wild itself, while glaciated high peaks break through the clouds. Over the rocks and cliffs surrounding the point we could see part of the big Chinstrap penguin colony located here, with around 5000 breeding pairs enjoying the wild conditions of the area.

We can actually compare the landscape we admire with some pictures that still remain nowadays of the Shackletron’s and his crew epic struggle for survival that their expedition ended up being. Between other changes in the set up, the most obvious ones are the receiving of the Furness glacier and the rockfalls from the cliffs overlooking the actual campsite of the expedition, nowadays making it look even smaller than in the old times.

After we all had a peek at Point Wild, Europa sails off the bay with the idea of spending the night drifting in the sheltered waters off the North coast of Elephant. For that we heave-to, both masts braced on opposite tacks. The only sails set were Fore Top Mast Staysail and  a backing Aap. Drifting too much offshore at times we find ourselves on higher swells and windier conditions, then is time to steam back closer to land. Like this we spend a relatively quiet night slightly rolling in the long NW-ly swell that hits the island.