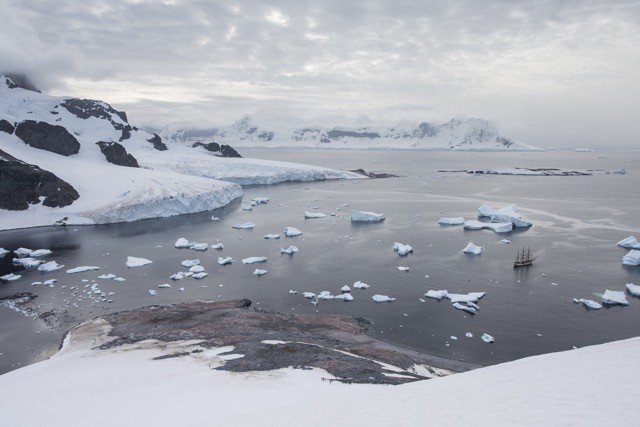 We have been educated on the finer points of penguins by an excellent talk from the equally excellent Jordi about these bizarre birds. Most of us were good students and listened attentively, and those who dozed a little were polite enough not to snore too loudly.
Our next stop was to be in the South Shetland Islands and using the knowledge that we had gained we realised we were leaving the colder habitat of the Adélie penguins who needed the sea ice to a climate more favourable for other species. We confidently predicted vast colonies of Gentoo’s and Chinstrap penguins, and checked we had enough space on our cameras for a few hundred pictures of each - assuming we could be disciplined and restrained in our shooting. As we headed north past the Antarctic peninsula along the Antarctic
Sound we were treated to several guards of honour of Adélie penguins who also heading for the open sea to get food for their imminent offspring back on the islands we had just left. Each group of one or two dozen penguins would porpoise along beside the boat, before getting bored and speeding off into the distance. Penguin power beats diesel power. Our stop is to be Deception Island, where we could take the ship into the collapsed magma chamber of a volcano. An active, steaming volcano. Which has erupted and destroyed at least two research stations during living memory. Complete with emergency protocol about what to do if the volcano became less dormant during the landings (the ship gets out as quickly as possible, the landing party scramble to the outside of the island across fields of boiling mud and sizzling lava and hope to be rescued by the ship if it is still afloat). The entrance is narrow, and due to a rock in the middle and a reef on one side the usable part is narrower still. Even without any changes to the landscape due to the imminent eruption the ship would be fleeing from. This all raises an obvious question. “Is stopping here a good idea?”Plan A is a landing on the outside of the at a penguin colony, followed by a few landings inside the volcano for a scenic walk or two. Jordi and Sarah decline to give us any distances for the walks on the not unreasonable basis that we would be very sceptical of anything they did say. A token check in the swell followed by a handbrake turn before breakfast lets us know that the first landing is not going to happen but rather than abandoning Plan A altogether, we simply go to the subsequent parts. We motor to Telephone Bay at the far end of the crater instead,
presumably to maximise the distance to the entrance should the volcano blow. The landing is benign, onto a cinder beach. A few penguins are chillin’ and look a little disgruntled that their peace and quiet is being shattered by these multi-coloured beings from elsewhere. Ignoring the scenery, we snap away at the penguins, and the token seal. There are no penguin colonies to be seen.
Que pasa? As we climb the small rise behind the beach, the guides point out the interesting history which can be read where the ice meets the sea. The strata give a history of eruptions - layers of ice caps and ash, each ash layer corresponding to an eruption which covered but did not melt the underlying ice. There are a lot of layers. Jordi leads the route march around the crater of a satellite volcanic cone, while Sarah guides the leisurely ramble. The views are well worth the effort, despite the wind on the rim which threatens to blow us off our feet. One side of the cone is steaming - this is definitely not an extinct volcano, and Jordi adds to our unease by noting that he has never seen this part of the cone steaming before. Back at the landing the photographers outnumber the penguins by about eight to one. The next stop is reassuringly close by the entrance, in Whaler’s Bay, where a derelict Whaling Factory and UK Scientific base are located. Somewhat less reassuringly, volcanic eruptions have destroyed a sizeable portion of both. For once there is free roaming (within a well-defined area) as all the toxic materials were removed during a site cleanup in the early nineties. A couple of penguins put in a guest appearance at the landing to the delight of some of the galley slaves who have been given an afternoon pass to go on shore and will not now leave Antarctica without seeing one at close range. We check the lookout, the old boats, the shattered barrels, the whale bones, the hanger, the cemetery, and the ruined station buildings and above all, the steaming beach. There are no penguin nests or colonies to be seen anywhere.