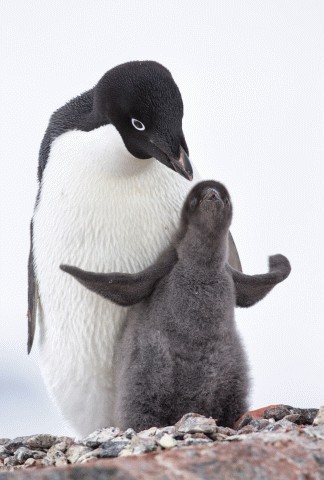 Early in the morning the drifting ice pushed us to pick up anchor and leave from our spot a couple of hours before planned. Slowly and not without difficulty the Europa makes her way retracing the steps from yesterday until reaching less treacherous waters. Soon we are already in front of Yalour Islands, the destination for this morning. The large amount of icebergs drifting all around prevents us to drop anchor, so the Mate and Captain prefer to keep the ship drifting as well, while we wait until breakfast is finished. Then a scout boat is sent to check for a suitable and easy landing spot, and soon we are all landing on this Adelie penguin land. This species distribution range on the West Antarctic Peninsula starts approximately on this latitude of 65ºS and extends southwards, looking always for cold icy waters and Krill.

A perfect spot to enjoy the several spread out rookeries of Adelie’s occupying virtually all the round hill tops of the island. In the background the high-glaciated mountains of the mainland appear and disappear between the high clouds, providing a magical background for this quiet and relaxed landing. We could spread about and take our time to just observe the interactions between the Adelie’s, their large chicks and the several Skua’s scouting the territory in a hunting mood. A great spot to spend the morning. After embarking around 12:00h we start heading North towards the destination where to do the zodiac cruise planned for the afternoon. Still dealing with icy waters we make our way northwards to Salpêtrière Bay, between Pleneau and Booth islands. There we are welcomed by multitude of huge icebergs, where we launch our  boats and start our cruise. On the way we get amazed by the unique nature sculptures that every single iceberg represents, with different shapes and colours. The water displays a greenish colour indicating the large amount of phytoplankton that flourish here during the summer season.

We cruise between icebergs and sea ice, the first coming from calvings of the massive glaciers surrounding us, the second being frozen sea water, still remaining from the pack ice that grows around Antarctica in winter, in fact doubling the area of the continent during this season. During the cruise we pass by in front of the South coast of Booth Island. The whole area is important in the sense of the golden ages of Antarctic Exploration. Jean Baptiste Etiene August Charcot, overwintered here on 1904 on his Tall Ship “Français”. During this time they built the large rock cairn that we could see on top of a hill. On the ice floes we spotted a Crabeater seal during the first cruise and a young female Leopard seal during the second one. As the wind picked up steadily we make our wet way back to the ship that was looking for shelter behind some large bergs, and soon we begin our way North through the Lemaire Channel on a gorgeous, windy and sunny evening.

After dinner, the galley surprised us with a delicious chocolate pie, to celebrate Jenny’s birthday! Followed by a recap and briefing by the Captain and guides about the last days activities, sailing and plans for tomorrow. As Bob tells us entertaining stories and anecdotes about Port Lockroy, the crew set both Top sails in the Fore mast and the Lower Top sail in the main and we start sailing. With 25 knots of WSW winds the Europa sails at 6 knots on a NE-ly course, our first real stretch under sail in Antarctica, from the Lemaire Channel to the Neumayer Strait through Butler Passage to reach Port Lockroy, where we plan to spend the night.

We keep the sails on until reaching our destination, first taking away Main topsail, then Fore Upper Topsail, and we sail at 3 knots to our anchorage in the so called Back bay, just around Goudier Island and in front of the glaciers of Wiencke Island. Engine start at the last moment before dropping just because we have to manoeuvre between 2 smaller ships that are already here and the fast ice covering half of the bay.