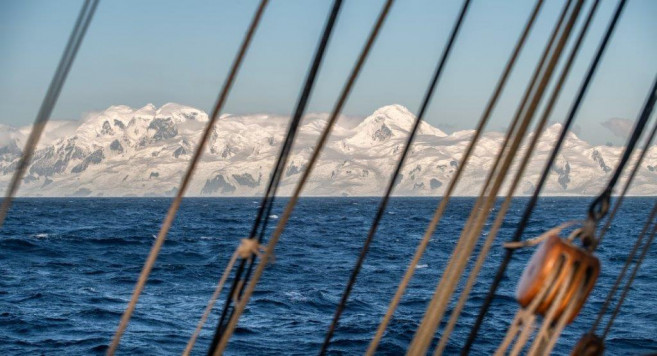 After setting some canvas during the night and motorsailing our way out of the South Shetlands, early morning found us entering the Boyd Strait turning off our engines and enjoying the SW-ly winds of about 20kn. This wide channel separates Snow and Smith Islands, linking the Drake Passage with the Bransfield Strait. First sailed and named by James Weddell
during his expedition in 1823, after Captain David Boyd from the Royal Navy.
Under main course, top sails, lower and middle staysails and the spanker, we steer a 320º course, leaving Antarctica behind under clear skies which allow us to have a look at the low lying Snow Island in the East and the spectacular Smith Island on our port side. An incredible setting with the Europa under sail as a great farewell to Antarctica. We set topgallants and outer jib on slightly decreasing winds, caused by the wind shadow of the more than 2000m high mount Foster, the highest
point of the Imeon Range, that runs over the whole of the mountainous Smith Island for about 20nm. This high mountain range was sheltering the NE corner of the island and surrounding waters from the 15 to 20kn of SW-ly winds, but gradually we
get into more open waters catching again the open waters windfield, keeping us at a good 5 to 6kn progressing under sail for the whole day. However, in the afternoon the wind started to decrease, a tendency that will continue for the rest of night and tomorrow if the forecast is correct. That made for adding the rest of our canvas, but the higher staysails. Like this we made way until after dinner, when it was necessary the use one of our engines as help to the sails to keep an average speed of about 5kn. Looking ahead, Captain and Mate, using the new technology of weather and wind forecasts that can be downloaded in the bridge computer and layered over the sea charts, trace the best routing for the oceanic sailing. This time we may have to use longer time than for other crossings through the Drake Passage, or a less elegant way of doing it, using our engines to push through the light winds, then northerly winds almost straight on our nose. That way of programming speeds and sailing
conditions while looking ahead, just make us think on how daring it must have been in the old times of sailing and of discovery of Antarctica, in the sailing vessels of the 18th and beginning of the 19th centuries. They had no possibilities for proper weather forecasting, their charts and maps were not accurate if they even existed, and their capabilities of precise positioning were still under development. To introduce us a bit more on the old and new navigation techniques, Maria started today
with her lectures about it. First starting to explain the concepts of a nautical chart, latitude, longitude, magnetic variation and deviation of the bearing to understand the meaning of dead reckoning navigation, extremely important for the next step: celestial navigation. Not completely leaving the subject, Jordi today had a talk with us about the sea ice, its effects on the navigation in the old times, trapping and crashing ships while drifting following the oceanographic currents of both Arctic and Antarctica, when sea ice charts and satellite pictures were not available either. But also, we were introduced to the processes
involved on the freezing of the seawater and its implications for the global oceanic circulation of the planet, producing major flows driven by thermohaline effects. Formation of deep-water masses, following the winter freezing of the seas in the Polar Regions, plus their movements around the world’s oceans, which have great repercussions on controlling the global Earth climate. In the evening, after all the talks and day’s activities, a mixed group of Hourglass dolphins and Pilot whales payed us a short visit. Both species are normally seen slightly further north of our position, still at the latitudes of the South Shetland islands, but the rise in surface water temperature to about 4ºC may have helped on their incursions further South. The Hourglass is a small oceanic dolphin with a characteristic and striking black and white coloration. Typically from cold waters, mostly circumpolar around Antarctica, being the southernmost dolphin species recorded, while the Pilot whales from the
southern hemisphere are principally associated with the Humboldt, Benguela and Falklands currents. However, it is a largely nomadic species visiting sometimes Antarctica.