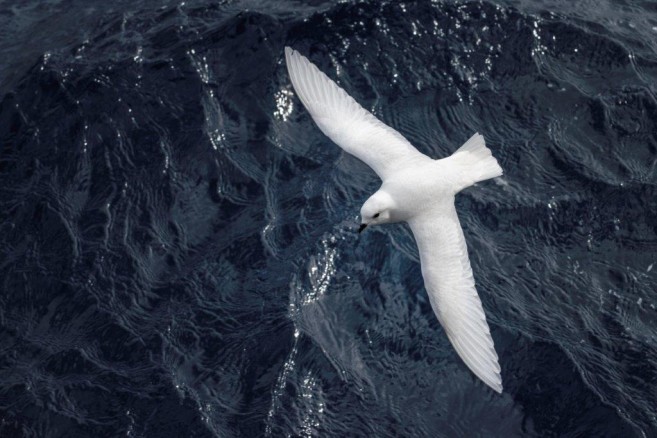 After eight long days of less than comfortable weather conditions and constant pitching and rolling of the ship, we are finally greeted by calmer seas and last evening’s wonderful sunset. Later on, the weather gradually became cloudier ending up with snow showers during the night. At that point the wind was good enough to keep a good SW-ly course and add the lower top sails to the staysails that helped our engines on our progress. But by the early morning, the continuous changes in wind direction and strength, made for clewing up the squares and furling them. Also for a while it was necessary to strike all canvas for a couple of hours, motoring on naked masts and stays, until it was possible to set some staysails once more. A couple of them couldn’t be set anyway as some damage had been found on them and they were in need of repair or replacement. The inner jib got provisionally substituted by a spare storm jib, while another one was bent-on as a main topgallant staysail. Along the journey the variable W-ly winds kept backing and veering, coming alternatively from the WNW to WSW, situation that made for several changes on tack and course, adjusting staysails and yards to every new wind condition, and our course accordingly. With a general heading to a SW direction, as straight as possible to the Eastern tip of Antarctic Peninsula, today we kept a zigzagging track. The overcast skies started to clear up during the morning, the winds to calm down and sunshine bathed our decks. The change in weather also brings a burst of energy to all of us on board, as everybody finally could enjoy a night of comfortable sleep and the sound of laughter is heard from all corners of the ship. Faces that have been missing for many days are now starting to re-appear and a healthy appetite means all food quickly disappears from both breakfast and lunch buffets. It is still cold outside though. Many layers of clothing are still necessary for our duties at the wheel or on lookout. The lookout was much less busy today than last night. Following our landfall at Signy Island and the numerous icebergs found on our way off the South Orkneys, today just a couple of them showed up far in the horizon. The easier steering as now we motor sail, plus the amenable lookout in the abating winds and seas, all helped to have a good birdwatching journey. Besides the usual sight of Cape petrels, Prions, Southern Fulmars, occasional Giant petrels and Black browed albatrosses (those a bit further south than where they use to hang around, but nevertheless good feeding grounds for them, before returning to their sub Antarctic breeding areas) today we saw two new spices of birds: the Snow petrel and the Antarctic Petrel. A beautiful sight that many of us made our best efforts to capture on camera, with varying results of success. The Antarctic Petrel is a circumpolar bird which can be found by the pack ice and iceberg zones in the cold waters of the Southern Ocean. Much more scarce and rare than its relative, the Cape petrel, its slightly bigger but share with them the black and white coloration, but presenting a distinctive pattern of just two stripes, on white, one black running from tip to tip of the wings and over the body, instead of the patchy aspect on the Cape petrels. Often, like today, they can fly together in combined flocks. The Snow Petrel is an all-white petrel with a prominent black eye and bill. We already have seen them in the South Orkneys and briefly in South Georgia, but now we are getting closer to their actual realm in Antarctica. There it often nests inland of mountain rocky tops that stick off the glaciers and ice caps as far inland as 300 kilometres. Scotia Arc islands are also their homer. At sea they can be seen on foraging trips all the way to the open waters of the Southern Ocean. Today a single individual used the apparent wind of the ship and the shelter against the headwinds provided by our rig, apparently even trying to land on several occasions. As the sun was setting after dinner, we once again tacked to stay on course to the Weddell Sea and we continue to motor sail in calm beautiful conditions towards the south.