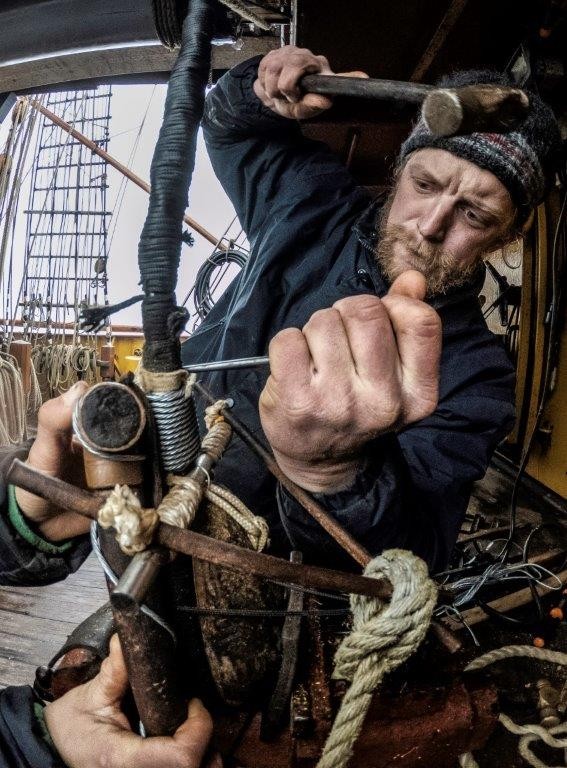 After reducing sail late last night, we kept sailing at a good speed until the wind, slowly but steadily decreased by the early morning, following the forecast we already studied. First, on those easing winds and seas, we set more canvas. The royals are unfurled, sheeted down and hoisted, together with the spanker. But just a couple of hours later the lack of wind made for starting the engines, clewing up the courses and dropping the dekzwabber. The flattening seas and lower swells helped many of us to get over the seasickness and today many more faces could be seen walking around
decks, joining yesterday’s decimated watches, having meals or attending to the different talks the crew and guides keep offering to all of us. So the practically windless conditions and calm seas have been very welcomed by many. But at the same time, falling into an area of variable light breeze between weather systems, it means the end of the good sailing. Thus it becomes necessary to make progress under engine plus some canvas, at least for the rest of the day. Today, by the early morning, instead of registering a lower temperature as we sail south, the measurements indicated a rise to 6ºC. These irregularities on the otherwise steady lowering temperatures, can be explained as follows: The open oceanic waters where we find ourselves since leaving the latitude of Cape Horn are characterized by the meeting of two major oceans, Pacific and Atlantic. Besides that, the large circumpolar current sweeps over the Drake Passage on its clockwise circulation around Antarctica, but also permitting a restricted water interchange north and south following the coasts of southern Patagonia. Under those mixing circumstances, different water masses interact and form turbulent meanders along their contact zones and swirls of water at a mesoscale, called eddies. Those transport mass and energy on their spinning way along the macroscale general currents. Crossing their path it can affect our progress, speed, steerage and create differences on the surface water temperature, by way of enclosing colder or warmer waters than the surroundings.
But leaving aside this instability shown during the previous hours, today the surface water temperature has been decreasing steadily, from the 6ºC registered in the morning to the 2.1ºC in the late afternoon. The dip in the temperature often comes associated with changeable weather and fog, just like happened today, all clear indicators of finding ourselves south of the eddy and mixing area previously mentioned, and actually crossing the Polar Front. This convergence area between two water masses is characterized by the denser and colder Antarctic waters sinking under the lighter Sub Antarctic water mass, creating a surface temperature boundary that surrounds Antarctica and separates it from the rest of continents and oceans. The interesting day regarding changes on weather, oceanographic patterns and entering Antarctic waters, it was not much reflected on the work on deck. The light breeze didn’t allow for stopping the engines, and the only sailhandling necessary was the change of tack when the wind turned to NE-ly, and the repairs that were made on the sheet pennant of the Inner Jib. Besides that, the crew spent time lecturing about our sails and how to set them, and also immersed on some maintenance projects. The lack of strong winds and the high southern latitude already achieved, over the 58ºS, brought a decrease on the birdlife flying around the ship.
The best sight of the day was in the morning, right before breakfast, when a group of Hourglass dolphins meet the Europa in the open oceanic waters of the Drake Passage in the surroundings of the Antarctic Convergence Area, where they can usually be found. The Hourglass dolphins make the Circum-Antarctic oceanic waters their home, making it the southernmost dolphin. With their relatively small size and strong black and white hour-glass shaped pattern, they are fast swimmers and like to bow-ride ships. They move in typical familiar groups of 4 to 8 individuals, composed by males, females and calves, being the sexes are easily distinguishable on the adult individuals, as the males have much larger and lobed dorsal fin than the females.