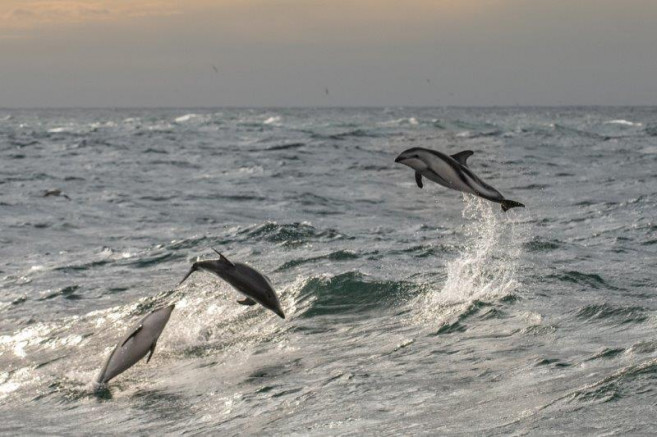 Squalls and showers gave us a break last night, while we could enjoy a nice downwind sail, having the chance to set the Skysails once more. As the wind turned and started to blow from our backs, we gradually braced to almost square with all squares set, Spanker and Gaff opened to the tail wind, Outer Jib in the bow sprit and Mizzen Top Staysail plus the Vlieger. Both last sails were stowed away before breakfast, under increasing NNE-ly winds blowing over 25kn white we take a Southbound course at a speed of about 7kn.

Increasing latitude and rising winds meant also the chance to spot more and varied seabirds. Heaps of the ever-present Black browed albatrosses show up this morning, teaming up with a handful of their larger relatives, the Royal albatrosses. Even though their huge wingspan can’t be properly judged when they fly far from us over the swells, and without having a reference to size them, it was obvious that they were much larger than any other of the birds we have seen so far. It is interesting to see them around here because they breed only in New Zealand sector, although their presence in relative large numbers off South America has raised speculation about the nesting areas.

Together with the albatrosses, White Chinned, Giant and three first sights for this trip, Cape petrels and Wilson Storm petrels have been spotted this morning, together with a handful of Terns, suspiciously looking like the Arctic species, which every year they fly from their breeding grounds in the high Arctic, all the way to Antarctica and back.

Later on some Kelp gulls showed up indicating the proximity of the coast not so far away to our Starboard. No other land than Peninsula Valdés, well known nowadays as a tourist destination in Argentina. But things were very different 500 years go, when the area was first officially discovered by Magellan and his fleet on the 21st of February of 1520. Today we are sailing just 115nm West from there, avoiding the Falklands current which would bring us to the north and far away from our destination. The conditions by then were very different, because they sailed here at the end of February, suffering storm after storm and knowing the southern winter was coming. We, on the other hand, are having a wonderful weather with much less wind and cold temperature that expected, summer is coming to this area.

At a latitude of 42ºS, which indicates the beginning of the Patagonian area towards the South, the region represents a main breeding ground for Southern Right whales and is also home for large populations of Sea lions, Elephant seals and Dusky dolphins.

Indeed, just at breakfast-time a large group of the latter ones seemed to rush from the distance to have a good look at our ship. Paying good tribute to their famed acrobatic reputation they surf and jump off the water, clearly showing their striking white-grey and black pattern with two light streaks that fork forwards to the base of the prominent two-toned dorsal fin. In the world, there are three geographically separated populations: around New Zealand and offshore islands, South Africa and South America, where they have stable populations in the offshore waters of Argentinean and Chilean Patagonia. After about an hour they disperse and disappear in the vast ocean, while we try to keep up with the decreasing wind under variable weather conditions, even raining before it became warm and sunny again. NE-ly winds die down as the temperature rises again to a T-shirt weather. On that conditions all Square sails are clewed up and the Staysails are stowed away, just leaving sails set in the Mizzen plus Outer Jib. Like this we motor our way south on a 200º course at about 5kn in virtually windless conditions.

Following on our route, during the last 24 hours we covered a distance of 111nm, in straight line. Those days we can actually achieve just about over the hundred daily miles thanks to the help of our engines combined with some sailing. We find ourselves on a variable weather area with shifting winds, influenced by little High Pressure systems travelling from South America to the Atlantic. But soon we expect to reach the zone south of the High Pressures, where the Depressions sweep over the ocean from the West. Already for the upcoming weekend stronger N-ly winds are expected, that would help to give us a kick to the Falklands.

But until then we will have to rely on using our engines often and sail as much as possible for a good arrival time to Falkland Islands. And as a matter of fact, during the afternoon we encounter strong Southerly winds of over 20kn, blowing straight on our nose. That made for changing our steering more to the SW and climb aloft to furl all the Square sails and Upper Staysails. With this new course we now motor-sailed at 5 to 6kn under Lower and Middle Staysails, Spanker, Gaff Topsail, Fore Top Mast Staysail plus the Inner Jib.

With all this sailhandling after the afternoon coffee time, the scheduled talk on Penguins that Jordi was planning to do had to be postponed about an hour, but nevertheless he could introduce the biology and the different species we can see in the Falkland Islands and Patagonia, finishing just before dinner time. Earlier on, Maria had also lectured on Stars and constellations. With the starry nights we are having, its is time to look with different eyes to the night sky. She introduced the voyage crew to the wonderful world of stars and constellations and teach them how to locate themselves like the old sailors used to do. The celestial sphere is not unknown anymore, now we are available to distinguish the main constellations and circumpolar stars. The talk also went on with some historical hints on astronomy, and making us realise why we should look out the stars more often. Now we are ready for the next step: the celestial navigation.

Evening watch experienced similar conditions than the afternoon, but with dying winds. Europa started steering on a more Southerly course, heading more straight into the wind. Then, the Lower Staysails had to come down. On that fashion we reached sunset time, that again offered a wonderful orange sky and a short glimpse of the Green Flash. How lucky we are to have seen it two days in a row!

The same weather and wind situation went on until the early hours of the new day, when the 5 to 6kn off wind veered to W-ly, making for changing the Staysails tack and set the Dekzwabber.

Very interesting, how lucky to see so many birds and dolphins. My husband and I have sailed in the North Sea, and seen the birds and dolphins up there also a few Minky wales. Sadly we have sold our boat now. You have my daughter on board, I hope she is behaving herself! Izzy