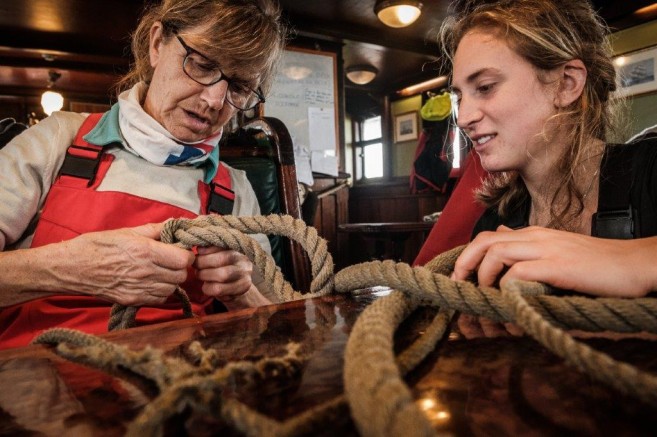 Windy and rainy night as we gain distance towards the Southeast. Wind keep blowing pretty hard between 25 and 30kn, slowly backing from E-ly to a more ENE and NE, allowing to keep steering on Close-hauled bending our course accordingly to the SE. Forecasted are similar wind conditions and even becoming more N-ly, fair for our purposes of gaining distance first to a bit higher latitude and
then direct our sailing efforts towards Cape Town. So far for almost our entire way from Tristan shores we have been braced sharp, Full and By and Close Hauled. This point of sail refers to when
the course to steer is slightly upwind. With Europa’0s rigging and characteristics, trying to sail as close to the wind as possible we can keep her sails working to about 60º of the apparent wind, and that is how we are steering now on the continuous variations on the wind of several degrees.. Instead of every few minutes being given a course from the wheelhouse, now we learn how to keep the course on that way. No longer steering by the compass, at all times a crew member is giving us a hand to keep the ship high into the wind within this 60º limit, helped by the new display on the iPad we use for navigation, with its screen set at the moment for this purpose. Later during the morning, the NE-ly wind becomes steadier, allowing again to sail on a determined course. Still with blows shifting between 20 to 30kn, we keep sailing on reduced amount of canvas until the afternoon, when more constant winds allow first to set the Outer Jib and then the Top Gallants, adding approximately a knot to our speed. By dinner time Europa slightly pitches and bumps onto occasional larger waves at about 7.5kn. Later on, and as forecasted, the wind kept backing to become more N-ly, and the rest of the day is spent still keeping a course that follows it, braced close-hauled. In that way we are gaining terrain both Eastwards towards Cape Town but also Southwards. Like this we try to get off the
area more affected by relative High Pressure Systems, common at latitudes about 36º to 30º S, and try to head closer to the Roaring 40’s where W-lies are regular, fair to our intended course.
The rainy and overcast day has carried also some stronger squalls, keeping the watches on stand-by on several occasions, in case is needed to strike the upper sails set and Outer Jib. And so it happened during the last hours of the day, when Top Gallants are clewed-up and furled, not to be set again in a few hours. After the wet watches on deck, while doing the lookouts and steering under the light rain, it was much appreciated that the permanent crew took over those duties so we could all attend our Second Mate Merle’s talk on navigation. Today she explained us about Collision Prevention Regulations at sea, quite relevant, at least for our lookouts, having in mind that we are gradually getting closer to South Africa and its main trading Ports, waters where Cargo and Fishing ships will be soon a common sight. After breakfast and lunch, the rest of Permanent Crew also met us in the Deckhouse, after gathering some ropes and gaskets for a workshop on rope-work, like splicing and whipping.