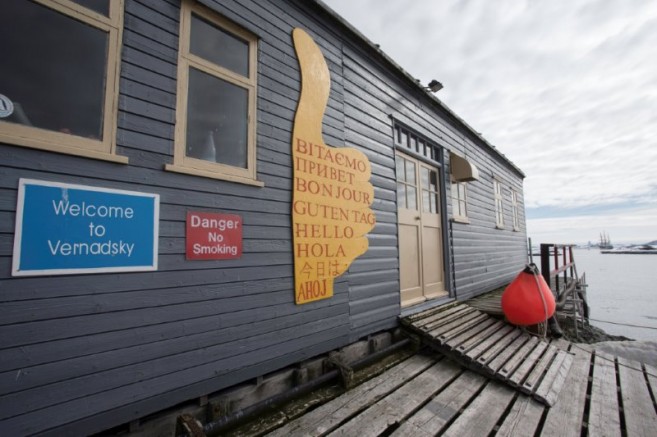 Europa is ready to ring in the New Year: beer hive is hoisted on the main mast, braai grills on the main deck are smoking

Europa is ready to ring in the New Year: beer hive is hoisted on the main mast, braai grills on the main deck are smoking, Antarctica beers are snuggling a massive glacial ice sculpture. As we prepare to welcome 2015, some of us are recovering from a (preliminary) New Year's Eve celebration at Vernadsky station -- the southernmost point of this epic journey. The station -- quite an epic real estate deal for the Ukrainians, who bought it off the British in mid 1990's for a whopping 1 pound -- is manned by 10-12 men (and men only) the entire year around.

As the year-long shift starts in April, the current team was quite excited to welcome the bark Europa crew (apparently only the 4th visit this year). The Slavic crew members were the first to storm the self-proclaimed Southernmost bar in the world (after some sightseeing accompanied by singing Weddell seals on Winter Island), as the entire group quickly stratified in those drinking, cautiously trying, and observing in bewilderment the explosion of Ukrainian / Russian / Check joy. While I cannot comment on the significance / value / quality of the research conducted on this station, I can testify to the stellar quality of vodka infusions (manly white and lady red) made by these Ukrainian officers. Seeing 4 Russian-speaking women was proclaimed God's New Year's eve gift, and, chaperoned by an imposing Russian-speaking American, we joined the base crew for a Soviet-style Novy God (having negotiated curfew with Gijs and Klaas in advance, of course). Liters of
vodka, kilograms of home-made saurkraut and dozens of blinis; drunken toasts; and even more drunken dancing under psychedelically-colored sky painted by setting and rising sun. Was well worth the hang-over. Budem!