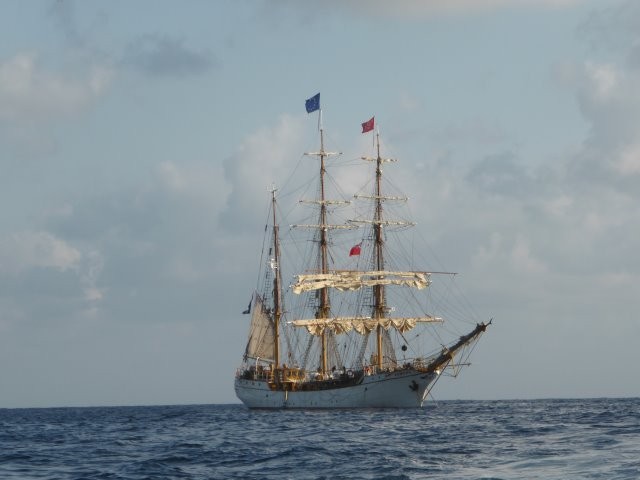 A new update from our science team on world ocean day!

Since St. Helena we’ve transitioned into the South Equatorial Current and noticed a significant shift in the amount of plastics we’ve sampled in the surface waters, as well as in the types of marine life, and of course a large temperature increase! The Benguela Current flowing north along the west coast of Africa carried far more plastics in the surface waters, whereas this part of the ocean has very little, with only two or three particles larger than 0.5mm showing up in hour long trawls, compared to well over ten large particles per trawl in the Benguela current. We’re interested to see how the transition into the Equatorial Counter currents in a few days affects sampling.

On Ascension we got ashore and met with the conservation office who confirmed that the beach of North-East bay would be the most likely area to give a good representative sample. We hired bikes to get across the island, and after an hour and a half ride halfway up and down the volcano we arrived at an almost pristine golden sand beach. The greatest disturbance visible was the freshly vacated nest of the green turtles, who have just finished their nesting season.

In terms of pollution, the beach was as clean as the surface currents of the last few days, excepting some fishing line and some detritus from Long Beach, on the West side of the island, that likely came from onshore. An interesting result, as this could mean that plastics are being trapped elsewhere before they enter the surface waters of the South Tropical current, or that they spend less time in that current and sink faster, or of course, that there are simply fewer plastics entering that current.

In terms of marine-life we’ve started to see more small fish and algal mats, as well as an increase in the size of the Portuguese Men of War. Minor complication, but still quite exciting to see up close!

Want to do something for world ocean day? A great way to contribute is by limiting the amount of single use plastics you buy, for example in food packaging, and by using re-useable containers made of long-life recyclable plastic and other materials. You can also share our page – Research for clean seas: Researching plastics in the Atlantic, to spread word of our research.

You’ll hear from us again soon!