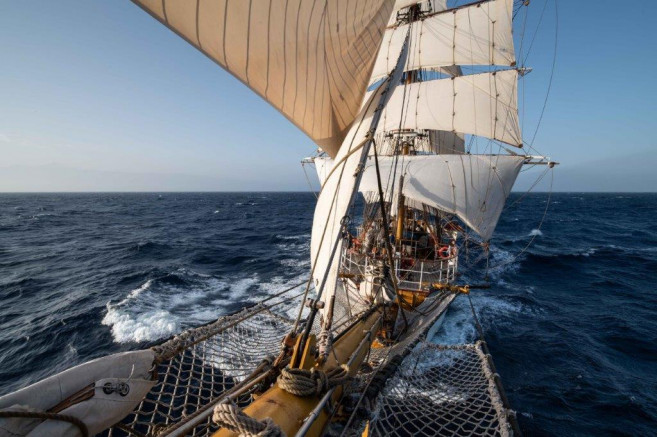 Dear fellow travelers on Europa; if this little blog is any offensive to you, I apologize.
Just come and find me and try to throw me overboard if you don't like it.
We will settle this like sailors.

Chances are that when you run into anyone you haven't seen in a while on board this ship, they have been sleeping.
The opportunity to go for a quick nap is sometimes golden.
This is why, on such occasions, we greet each other by saying “good morning,” even though it may obviously not be the morning.

Some of us like to mix it up sometimes, for the fun of it, but it's usually the noble English language we make use of to deliver this message, which may or may not contain a subtle subtext of “you did not enjoy hoisting yourself out of your bunk, did you, puffy-faced bastard?”

Ah yes, English. Sometimes I feel that not despite, but because we all speak the same language, it goes to show we are from different parts of the world.
Never before have I been in the situation in which the density of different (here come the insults) grotesque parodies of one
tongue prevailed.
Among us, there are those that cannot hide their Dutch, German, Spanish, French, Italian and Portuguese native speeches.
Dear me, even some of the American, Scottish and British British just sound like movie characters.

So what about me? I'm no different.
In fact, the longer we're away, the less effort I put in trying to sound somewhat neutral.
There's just no point in trying to hide it.
On the contrary, it's big fun!
And even though I maintain I don't have the discourse of a Bond villain, you shall see that de apple did not fell far from the tree.

thank you for this blog, nice to hear from you. enjoy your coffee and have a pressant yourney love and kisses, oma