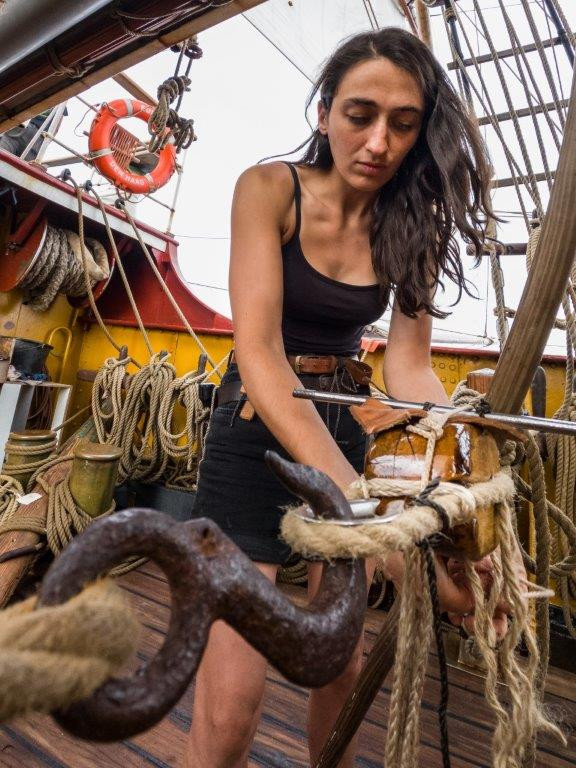 The day starts with a fresh permanent crew watch joining on deck, and the night watch turning-in, just after decks have been washed down and scrubbed. Bosun walks them having a good look at the sail trimming, state of ropes and the rest of the rigging implements. Time also for handovers from the Captain, Mate and crew about night projects and things still to be done. Notebook in hand she cross lines and write new ones, jobs for the hours and days to come. From then on, hands are distributed amongst different maintenance projects and sailhandling if required. A routine to keep the ship in good shape and to carry on with the great sailing and good progress. Like that we have sailed 600nm since departure, with 145nm left at our back during the last 24 hours. All in a handful of days that had brought us to sail in the tropics, closing up to the equator.

Fair weather allowed so far for this good speed, also offering a good chance for trying to keep up with all those maintenance and repair projects noted down by Captain, Mate and Bosun.

Despite the long period spent alongside different Dutch ports during the last year, when a reduced crew have been continuously busy with maintenance, in a ship like the Europa there’s always an ongoing up-keeping program.

Running and standing rigging always find countless ways to be replaced or repaired; blocks require overhauling, sanding, varnishing and new stropping;  new gaskets have to be spliced and then knotted aloft; wherever the countless ropes are chafing against each other or rubbing stays or yards, chafing gear must be rigged; always there are some sails to be put together and stitched. On top of that, sometimes a new problem comes up, a mending required. Trying to stretch all the ships square canvas to the following winds, one of our Studding sails is missing in the configuration. The wooden boom of the Starboardside Topgallant one gave away a couple of days ago and the carpenters are busy putting their magic in practice against the clock once more, making a brand new one. With the easing Trade winds as we get further south closer to equatorial latitudes, it would be of help to have it hoisted soon. Wooden planks have to be glued together, proper shape and length have to be achieved before bending it on the canvas.

… it may be well to define a day’s work, and to correct a mistake prevalent among landsmen about a sailor’s life. Nothing is more common than to hear people say - “Are not sailors very idle at sea? - what can they find to do?” This is a very natural mistake, and being very frequently made, it is on which every sailor feels interested in having corrected.

… With regard to the work upon which the men are put, it is a matter which probably would not be understood by one who has not been at sea. When I first left port, and found that we were kept regularly employed for a week or two, I supposed that we were getting the vessel into sea trim, and that it would soon be over, and we should have nothing to do but to sail the ship but I found that it continued so for two years, and at then end of the two years there was as much to be done as ever. As has often been said, a ship is like a lady’s watch, always out of repair.

Out on deck and up the rig, the cloudier skies of today made all those jobs more manageable than under the scorching sun of the last days. For most of the day Europa sails under typical tropical small cumulus from vertical development, plus a hazy layer of higher cirrostratus. Despite finding ourselves on a pretty stable regime of north-easterly Trade Winds, of quite expected behaviour during the year, predicting tropical weather, sunny of cloudy conditions and local effects can be in many ways more difficult than predicting weather at higher latitudes.

Subtle changes in the ebb and flow of the atmosphere have much greater impact closer rather than further away from the equator. Small changes in barometric pressure in the tropics account for much stronger winds than are the norm in the subtropics or out of the tropics entirely. Nevertheless, fair Trades keep pulling us on our crossing, with the tendency of easing down as we get further south, impervious to the clear or hazy skies.