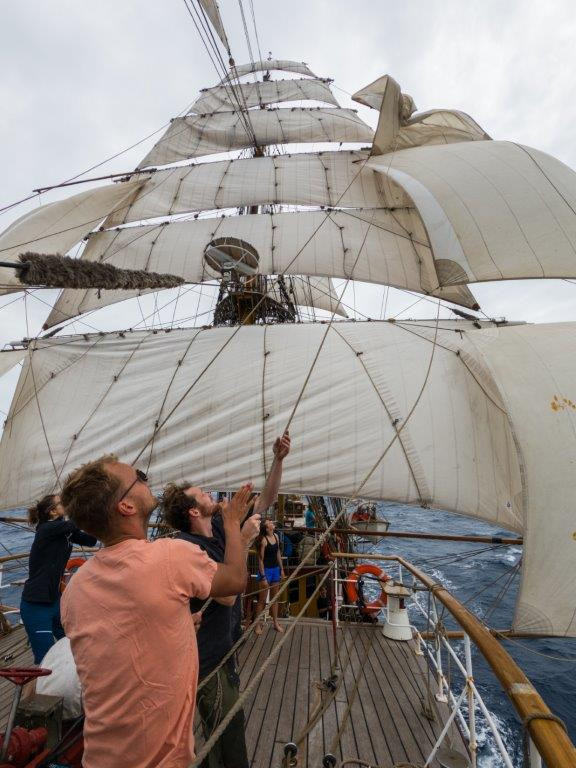 Keeping the good progress and opportunities for trawling on the micro-plastic research project, using the Europa as scientific platform.

The Trade Winds allow for good downwind sailing on our Southwesterly course. After leaving Tenerife port under sail, Braces were set square, a couple of Staysails pulled up, all squares sheeted down and hoisted, Studding sails fiddled around and spread to the fair breeze. Since then not much sailhandling has been required to achieve good progress. Just trimming to take the most advantage of the trustworthy winds and to avoid chafing on canvas and ropes. Now, just 108nm ahead of us to reach the Cape Verde Archipelago.

Take advantage for as long as we can of the winds blowing from the aft is the reason why the maintenance-repair priority now is the confection of a new boom for the starboard Top Gallant Studding sail, to get it up and running as soon as possible. Day and night, chisel and hammer in hand, our “chippies” and helping hands work on it, before we change oceanographic area to the doldrums, equator and then SE-ly trades in the southern hemisphere. Then,  the bracing and sail configuration sure will change to keep sailing towards the South American coast.

Gradually getting to lower latitudes, is expected for those fair winds to ease down, as they already have the tendency to do. But last night they started to pick up again, probably driven by the effects of an Easterly Wave coming from the African coasts towards the oceanic Atlantic waters. They develop in a vaguely defined area that may have substantial convective activity, and low pressures drifting on an east-to-west heading in the North Atlantic. These typically start off the coast of North Africa and are thought to be the result of a substantial imbalance between the temperatures of the Northern Sahara Desert and the cooler waters of the Gulf of Guinea. They are relatively frequent but it is interesting to note that some of them can develop on tropical cyclones or hurricanes on their way.

Not so startling for the moment, it just gives us a little help keeping the good breeze from dying down too much. The same winds that we have been sailing since departure, filling up our sails and allowing for a relaxed sail handling.

But for a change, during today’s midday hours it got busy on deck taking sails down, slowing the ship reducing to the proper speed of about 3kn that allows to deploy the Manta Trawl alongside and continue with Regitze’s scientific project on micro plastics in the ocean surface, framed into the Nordic Ocean Watch organisation.

Regitze is a volunteer researcher, and crew member on the Europa, one of the two that accompany us on this Atlantic crossing. Fran also is conducting her studies and research on board, this time about the bioluminescent plankton. So far during the present leg of the trip which started in Tenerife, just today’s trawls could be made, but they both look forward opportunities to come for using their nets, filters and microscopes.

We sail on the East fringe of the Atlantic Subtropical Gyre, an interesting area to get some of their samples.

Sky Sails, Royals and Top gallants are clued up, while all the  Studding Sails are brought down to the deck. In the meantime some of the hands on deck are busy preparing the trawl, and just about when lunch was served, the net skims already the water surface on Starboardside of the ship.

Their research will be conducted throughout the whole voyage covering both the North and South Atlantic Ocean, during which, samples will be collected periodically.

The micro-plastic project aims to investigate the presence and abundance of them on a transect across the Atlantic Ocean, and to use both current and historical oceanographic data to predict how the micro-plastic may have been transported to this area.

The methodology is based on automated visual observation for macro-plastic by time-lapse photos and by collection micro-plastic on the sea surface by manta trawl.

Since its invention, plastic pollution has become one of the greatest environmental challenges of our time. It is estimated that 8-10 million tons of plastic waste end up in the oceans every year. Furthermore, the EPA (United States Environmental Protection Agency) has stated that every piece of plastic ever produced still exists. Now they can be found across wide areas on the surface of the major oceans of the world. They come in many forms, shapes and sizes, but the actual definition of micro-plastic describes it as solid-synthetic particles or polymeric matrices, with dimensions between 1 μm and 5 mm, of primary or secondary manufacture origin, which are water-insoluble.

And of them, as ewe can see, the oceans of the world are housing many. Increasing our knowledge about this relatively recent and rapidly growing problem requires more and more thorough scientific research, and with it, help to understand better the oceans and the mechanisms of the world, and ways to deal with those new challenges.

Science isn't just about solving this or that puzzle. It's about understanding how the world works: the whole world from the vastness of the cosmos to the particularity of an individual human life. It's worth thinking about how all the different ways we have to talk about the world manage to fit together.