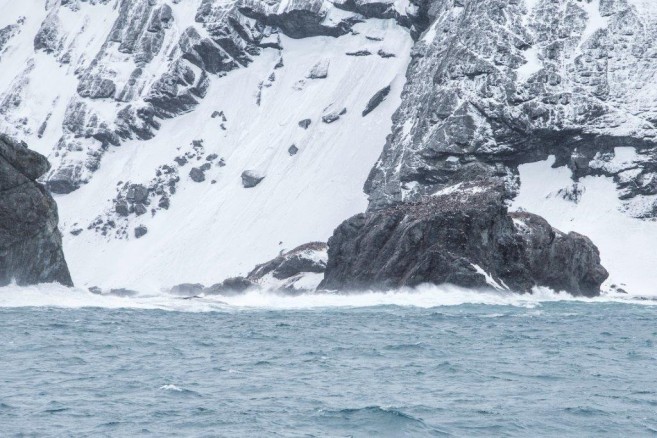 Yesterday we had a landing at the Ukrainian research station, the Vernadsky station. First we had to visit the old station. The weather conditions were not that great. It was snowing and sometimes hailing. The walk to the station seemed to promise a lot of problems, but it was not hard at all. In the old station you soon realized the harsh circumstances in which the people had to live in. In winter there are only a few hours of light. You wonder how many people have committed suicide over here. Good that we came in the summer and will never know. We went back to the zodiac’s landing point and up to the current station. We had a tour and at the end we sent some postcards and had ‘a’ drink in the bar. So far I know this is the only bar in the whole region. I was with Jelena, she speaks Russian; that means that we had a lot of free booze. ‘Astonishing’ there are no women parked in that station. One of the Ukrainian researchers told me that it is not allowed by the Ukrainian government, just for short visits the women are allowed to come. And in that case nothing will happen? On the way back a lot of us have enough antifreeze in their system. In the zodiac Jelena told about the 100 bras received by the bar every year. Euhhh? I am not quite sure whether all of these bras were handed in or were sent to the bar. Originally the tradition initiated by the British was that if a woman spends a night with a stationed man, she would leave a bra (wait a minute, where are all the bras from the Wordie House?!). However, the Ukranians have modernized the tradition and now a woman visiting the bar can exchange their bra for a free drink. Don’t get me wrong we had free drinks due to other reasons. I did not hear of any woman of our group who has handed in her bra, though I did not check on Jelena’s bra either. So you never know, maybe this ship has dark secrets. And what does the research station do with these bras? Hang them on icebergs and research the magnitude of stretch? Or… whatever, use your own imagination. Once you handed in your bra nobody will notice the difference of wearing it or not, because you wear so many layers that more or less all women’s bodies seem to be the same. Especially when one put her life blanket under the coat; in that case everybody looks pregnant. In cold weather conditions that will be okay, but in warm weather conditions that is another issue. By the way, on another occasion – there is a “break in case of emergency” glass framed box on Vernadsky station. If you missed that one, I will help you: it consists of three things – a small bottle of Jaegermeister, a condom and a cigar. I wonder if we have such a box here on the ship or what else are we supposed to do in case of emergency? Also I did not see that one in Wordie House, so it may have gotten used.

And now I make a bridge to the following; be aware of climate change. We shouldn’t want to wear bathing suits all over the world. Ethically totally irresponsible. Please let it be limited to the Mediterranean and the Caribbean. It would not make the world more beautiful. So, let us do something about climate change. Let’s keep the cold Antarctic the way it is now. A couple of thousand years ago, we all had hair – I will call it ‘fur’  - all over the place. The reasons were to protect us, keep us warm and for some specimen it was also necessary because of esthetical reasons. Nowadays, fur is more or less rudimental. Although on this ship a lot of men are having beards, it is predicted that human being will be totally bald in a couple of hundred years. Nevertheless we should not give up the cold regions.

I don’t know the exact consequences of the Antarctic Treaty, one of the agreements is that human impact has to be minimized. I also know that some countries still want to claim a part of Antarctica. For example, Chile and Argentina are stretching their borders of their territorial waters enormously. Argentina even sent women to Antarctica to give birth. I do hope for them that there were no previous births due to the passing of Drake Street. They probably had to travel by boat, because after all, after 26 weeks of pregnancy you are not allowed to fly anymore. But also Norway is claiming a part. And why? Just for being here in the past? Or are they coming back and restore the whales population as a compensation for the hunt they have done in the past?

Let’s be aware that only research should be done, and I do not mean oil drilling (someone said that is old-fashioned), gas exploring or looking for gold. There should be gold, I saw a lot of gravel.

We, real crew and voyage crew, are from all over the world. From Norway to Chile and New Zealand, from Canada to Hong Kong. The least we can do is to promote the protection of this beautiful and unique area, called Antarctica, in our home countries! Let’s do it!

PS. 1. We are running out of peanut butter due that in some cases the layers are thicker than the used sandwich. Eating such a sandwich must be a comparable experience to walking in deep snow and just falling into it to your knee and you don’t feel the earth. In case of the sandwich your teeth can’t reach the sandwich…

© Disclaimer, I am not responsible for any grammar or spelling or calculating mistakes due to circumstances mentioned before.

Hi there! Thank you sooo much for sharing your adventures by this blog I love to read your columns and look forward to them every day. I will join some sort of that pleasure in juli when the Bark Europa will be on her way from Horta to Stavanger: a totally different experience i quess.... Ship ahoi! Be save, Best regards Ellis