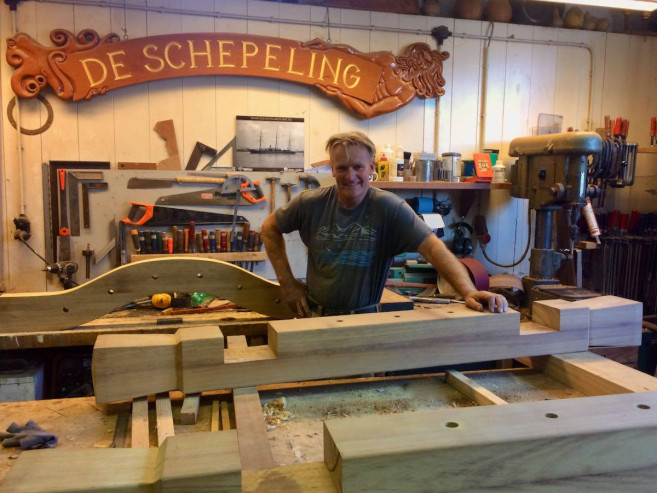 Since 1994 Bark EUROPA has sailed with an international crew; all part of the worldwide EUROPA family and every member has their own story to tell. This is the story of Peter Borsboom and Ilse Oelbers who have met on Bark EUROPA in 1998.
We are Peter Borsboom and Ilse Oelbers and we live in Harlingen, the Netherlands with our two children, Robin and Benthe. Peter and I met on Europa in 1998 in then homeport Amsterdam, Zouthaventje. Peter was the first mate, I applied as a ships carpenter and deckhand. During our voyages, visiting various different ports around Europe, Peter and I used to invent ‘mini vacations” together. This was often a two hours holiday when we were off watch, in which we tried to do as many things as possible, like site seeing, coffee, ice cream, walk on the beach and drink beer, all in two hours! We fell in love with the most beautiful ship of the fleet, and of course we fell in love with each other.
After a few years of sailing, the first Europa babyboy, Robin was born, and later on a Europa girl Benthe. We started working ashore in our little carpenters workshop at home and we became ships carpenters under the name ‘De Schepeling’ (old-fashioned dutch word for crew member). For 15 years we made wooden decoration for traditional ships, like figure heads and stern- and bow ornaments and all sorts of ships carpentry. In the meantime we followed Europa as much as we could, trying to visit her as often as possible. Sometimes we really missed the sea and the crew.
Nowadays, Peter still works as a ship’s carpenter and does maintenance on board Europa every year. Besides woodcarving for De Schepeling, I also started making free work and became a full time artist making bronze sculptures. We have a studio at home in Harlingen, where I work and where my work is also exhibited. Our children are now 17 and 19 years old. This year Robin started at the conservatory in Zwolle, studying jazz bass-guitar. Benthe would love to go to sea with Europa this summer. We hope it will be possible for both Benthe and the ship!
Europa will always be important for us. Her wonderful crew members from all over the world are like a big family and even though we did not sail for many years, we feel we are still part of this family and we feel always very welcome on board. In fact, we can presently see the ship’s masts from our window, Europa being moored alongside at ’t Havenmantsje’ in Harlingen !
Peter Borsboom Ilse Oelbers, ;Noorderhaven 111, Harlingen www.ilseoelbers.nl www.deschepeling.nl ilse@oelbers.nl mooiedingen@deschepeling.nl