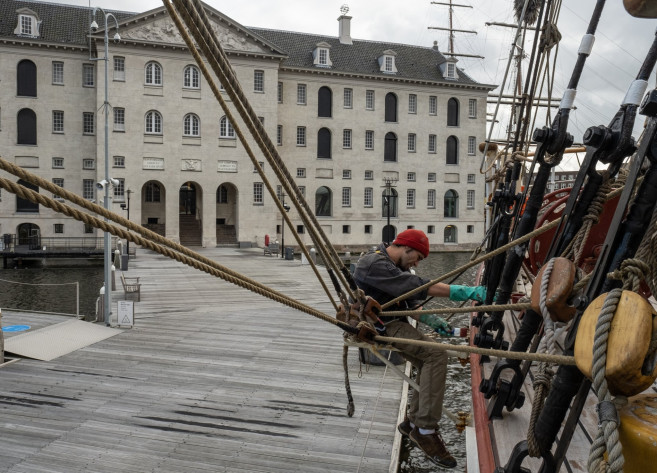 Since a couple of days ago we find ourselves alongside the jetty in the Het Scheepvaartmuseum. Time enough for the last preparations before we open the ship to the public. Entrance to the Europa will be offered as an additional visit to the impressive museum and another of the Tall Ships, Clipper Stad Amsterdam, which we share location with.

Last arrangements consisted on setting up banners, advertisement, merchandising and prepare the way of successfully accomplish the open ship period during those COVID times. On board, they included final paint and varnish touch ups, scrubbing decks and clean the common areas inside the ship, besides working aloft replacing some of our sails. With the winter approaching is better to take off some of the brand new canvas to avoid any damage, and bend-on older sails that will be rigged and furled for the cold and wet months to come.

And with a ship that has spent over the last three months busy on the ever ongoing process of maintenance, the morning of the 10th of October was the time for the first people to come on board and walk along her decks.
Sure school holidays helped many families to come and visit the ship, and to make it all more appealing for their kids, a sort of treasure hunt was set in place on board. A quest over EUROPA’s decks for the “Cool Seven“ the highlight wildlife species of Antarctica: Penguins, Orcas, Humpback Whales, Southern Elephant Seals, Leopard Seals, Albatrosses and Krill. Toys of them are placed here and there on board to be found.
Large prints of the 6 different species of Penguins that EUROPA visits every year in their homes at Subantarctic islands and Antarctic Peninsula, are displayed along the deckhouse. The slightly oversized prints can compare with the kids size.
Orca Whales live in pods of between 5 - 30 individuals, acting like a pack of wolves. Here on board we only have a single one. A stuffed animal, hidden somewhere on the Sloopdeck waiting also to be found.
The Humpback Whale is been commented as a hard one to find on the Europa, but in real life it is quite common to spot while sailing or cruising in the Antarctic Peninsula waters.
The seals got some confusion faces amongst the younger ones that, accompanied by their parents, tried to find and distinguish between them. A tip: Leopard seals are named after their black spotted coat and her predatory habits, having also a slenderer body shape than their relatives the Southern Elephant Seals. The latter are the largest seals in the world . With huge males often reaching over 5m of body length and weights around 4 Tons.
An Albatross in flight is on exposition indoors, hard to imagine that a real one wound’t fit there. The largest flying bird in the world, the wandering albatross can reach a wingspan of 3.5m.
Despite not being well known by many, kids are always surprised to hear that Krill is the most important species of Antarctica, as it is part of the fundamental base supporting its food chain. Krill provides vital food source for whales, seals and seabirds.

The world’s situation nowadays will not allow yet for continuing with the yearly Antarctic tourism, many voyages have been cancelled, lots of trips have been postponed, a good deal of dreams put off aside… but still, representatives of “the Cool 7” roam our decks, while their friends down South sure will enjoy a quiet season.