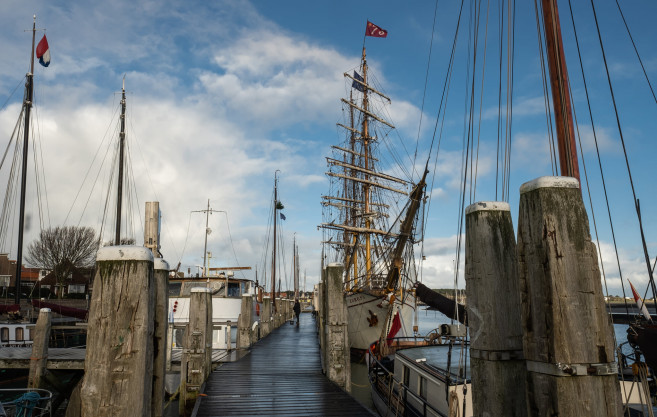 Recently Bark Europa made her way to the Dutch Frisian Islands, laying her moorings at West Terschelling, for the moment leaving behind the shipyard times in Zandaam or the thrill of Amsterdam city. Amongst fishing ships, Dutch flat bottoms boats and sailing yachts, she plans to spend a calmer time for these different Christmas and New Year's Eve.
In those moments of international viral fight with travel restrictions, ever changing rules and regulations, she still managed to gather a seven cosmopolitan Crew members, from United Kingdom, Canada, South Africa, Sweden, Spain and Netherlands. Sharing on board the call for the ship and her doings, and for different reasons spending on board those Christmas days. Crew aboard and managing people in the office, all keeping going on a journey to care about our ship during those difficult times.

For a large amount of the population living in over the 160 countries that celebrate those dates, regardless believers or not in Pagan Rites or Christian or of any other religious sympathies, undoubtedly Christmas is a time traditionally related with an atmosphere of merry, goodwill and reunion. While nowadays the latest one might be a difficult one to accomplish for many, this mind frame remain in all of us while celebrating what seems to be a large array of different Christmas and New Years Eve holidays. Not just as usual, influenced by the distinct traditions in the different countries, but now ruled by covid times and all the baggage that those words carry, that make for a change of individual choices on traveling and responsibilities.

Adapting to all that, alongside a wooden jetty on the largest of the Wadden Sea Islands, maintenance projects keep ongoing, now in a much quieter set up than in the shipyard.
With its 30 kilometres of sand dunes and marsh areas, our port for the following weeks, the picturesque Terschelling, is peppered by small forest patches and little villages. Is one of the most visited Frisian Islands, attracting visitors to enjoy its developed Western side and the wilder and more isolated Eastern coasts. Not just a beautiful place but also past and present of the islands are joined by the remoteness and numerous links with adventurous sails and Exploration, that we also love to enjoy in our ship in the current times.

Many ships wrecked on its shallow waters, and displays of recovered artifacts festoon some of the streets while others are gathered in cozy museums.

In the mid 15’hundreds Terschelling saw the birth of the famous Explorer Willem Barentsz, who devoted a great part of his maritime and exploration career to find a coveted Northeast Passage, amongst the Polar ice seeking for a northern waterway to trade with China. Unsuccessful endeavour then, and still an extremely challenging passage nowadays, he made three attempts that ended up with his life in the Kara sea island of Novaya Zemlya, after discovering Bear Island and Svalbard, archipelago that nowadays hosts great part of the bulk of the Arctic tourism. Tying up more connections between the history of the island and our spirit of adventure beyond the sea horizon, Barentsz was mentored during his studies by Petrus Plancius (1552–1622). He was a Dutch theologian-cartographer, one of the pioneers on celestial navigation, astronomy and geography. In the present his name can be read painted on the hull of one of the many cruise vessels that join the Arctic and Antarctic tourist polar fleet. From the Frisian Islands also Jacob Le Maire and William Shouten set sail in June 1615 on board the Eendracht and the Hoorn, in a trip that brought them to round the mythical Cape Horn for the first time.

A fascinating off the beaten track place where to enjoy a Christmas and the entry of what all wish to be a better new year.