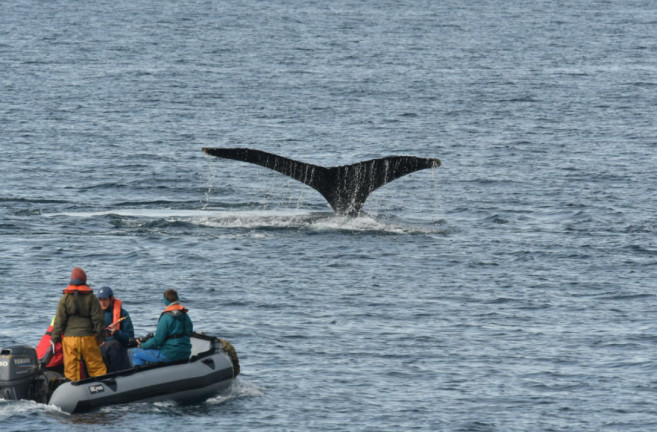 Since 1994 Bark EUROPA has sailed with an international crew; all part of the worldwide EUROPA family and every member has their own story to tell. This is the story of Benja, who sailed on Bark Europa as guide in Antarctica.
When I thought it would be just an ordinary day in November, 2015, I would have never been able to predict that this precise day, was going to shift the course of my life, forever.

I was sitting at my 80-years old professor’s office at the Chilean Antarctic Institute, listening to him ramble about something to do with whales or dolphins or even sea lions, when -as a routine thing I would do every day- I read him his new emails. One of this emails strike me, because it was written in English and had Dutch words all around. I read it out loud, and it was a message from Leentje Toering (what a weird name for me at the time!), and from Jordi Plana, the expedition leader. It happens that many years ago, Jordi worked with my 80-years old professor (on his 60’s by that time) in several research projects in Patagonia, and today were offering him a bunk for someone from the marine mammal research team to join the Europa and pursue the research efforts on the humpback whale population in Antarctica. I rapidly looked for pictures online about the “Bark Europa”… (…)…PICK ME! PICK ME! PICK ME! I told my Professor! I couldn’t even believe this kind of vessel even existed in real life and that it would be possible to join to sail down to Antarctica and look for whales. It wasn’t real.
As I have learned in my early life, every decision you take, has a consequent chain reaction. I had to choose between a normal, stable job, or dive into the unknown and see what would happen while joining the Europa.

Looking back at my first trip, I can only say it feels like a glorious dream. I couldn’t believe this time of humans existed, were everyone worked together as puzzles pieces, feeling like the Europa was a perfect body graciously and furiously swimming the cold waters of the Southern Ocean. It was love at first sight. My life was changed. My family doubled in size! Next year I had to go back again, although, on our first meeting, Klaas, mentioned they needed a diver for a maintenance check. I rapidly called my younger brother, who happens to be a commercial diver and was taking care of a lighthouse at the time and asked him: Can you make it to Ushuaia tomorrow? He made it. He joined, and we gave him a ride to Antarctica, since he had to be there anyways. And then Sebastian, my childhood best friend, who made it on board as an engineer apprentice for three weeks, and that thanks to COVID, had to change his life plans and sail to the unknown back to Europe!

Yes, it is the majestic of the Europa that makes you pinch yourself in the arm to realize if you are dreaming or not, but more than that, it is the unique kind of people that gets drawn to that ship what makes the total difference. To be honest, it gives me hope for human kind. My life has never been the same after meeting the Europa, and even though I find myself today between bones and orchards, I often find myself sailing in my mind with an amazing crew cursing the mighty waves of the South. An enormous thank you, to every crew member I have met in my trips, for teaching me how to get shit done in this crazy World we ought to call home.