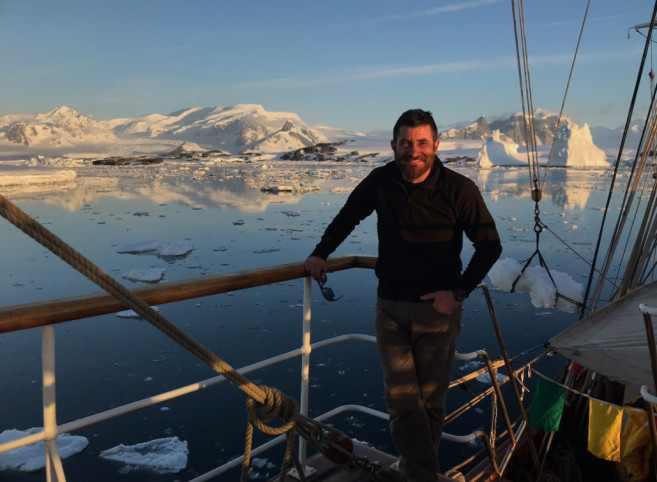 Since 1994 Bark EUROPA has sailed with an international crew; all part of the worldwide EUROPA family and every member has their own story to tell. This is the story of Finn, who became part of the crew in 2011 and sails on Bark Europa as First Mate.
I was lucky enough to jump aboard the Bark Europa in the spring of 2011 while the ship was undertaking her annual shipyard period in Cape Town South Africa. It had been several years since I had sailed on a ship with ropes to pull and masts to climb and I was a definitely nervous.
Months earlier the Europa had made a stop in Lunenburg, Nova Scotia, my home province in Canada. With some help from my fellow crew member Arran Flanagan I was able to get a seat next to Captain Klaas Gaastra one night at the local pub.

After some bumbling words about my experience on other vessels and awkward laughs I think I asked him if I could someday join the ship for a voyage. He must have agreed, because several months later I had quite my commercial sailing job and was flying half way to the other end of the world to show them I could be a good crew member for the ship.
I remember it didn’t take long before I was thrown into the mix rust busting, painting, rigging, helping in the galley and all the rest.

I’ve always found the best way to get to know someone is to do hard work together. I can easily say that ten years later and still working with the ship, that it is this hard work, tenacity and determination that makes the crew of Europa so close, so special and so much like a big family.

We have all struggled a lot this year but I know this ship and her crew are resilient. We have experience weathering storms together, finding pathways through the frozen ice when at first glance it seems impassable and we know how to take care of each other frozen fingers and all.
With lots of hope in mind I can’t wait to be standing on her decks again, sails full, pulling our awesome ship towards her next adventure and doing it again with all of you!