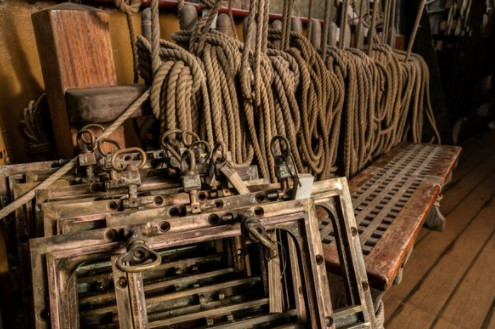 Due to the pandemic our ship is still alongside, waiting for new ocean adventures hopefully later in the year! But it doesn't mean nothing is happening, besides creating a new sailing schedule with all needed procedures we are also really busy with maintenance.
The crew is working hard, renovating cabins, the deckhouse and the drystores! Thanks to the financial support from Friends of Bark Europa! And the good news is, Jordi is back on board after a break! Time for new stories and photos from him!

"Paint vapours, protective face masks gloves and brushes,… time for starting Europa’s Deckhouse rebuild, until recently home for grinding sparks, blinding welding lights and high noise levels. Newly painted walls and bulkheads ready for windows to be installed, now wait too for carpentry jobs indoors to come up again with the cozy space for meetings, socialising and having a drink at its bar, well known for many who sailed with us.
The on board general maintenance period keeps ongoing since it began not much later than our arrival from the far South, when at mid June we made our moorings in Netherlands after sailing along the Atlantic Ocean. Europa’s onshore crew keeps being busy too with procedural and organisational jobs during those times when office tasks are preferably performed remotely from home.
The ones living in the ship have been since engaged in jobs from up the rig to down below, from sail changes to the full rebuilt of the storage area, cabins, library and lots of the stuff in-between. Truth is that different maintenance projects at different levels are almost constantly running, in shipyards, dry docks but while sailing as well. With the difference of now having loads more time than usual and more possibilities, being alongside in Europa’s home country. All in a process to get most of the jobs ready soon, to start balancing the chances of setting sail again whenever it would be possible.
Amongst them all, shines what started as a harmless small job with someone saying something like “let’s needle gun in the laundry room, a bit behind the sink…” and ended up with what is probably the longest project undertaken in the Europa’s maintenance for years. For its been quite a task re-inventing the washing machines´ and dryers´ home. Stripping its wall panels straight to the hull and bulkheads steel together with the rebuilt of the floors, walls, ceilings, electrical and pipe systems, of course not to forget is the sink overhaul, and … well, what else… you name it…
As the project kept evolving and developing onto unexpected lengths and struggles, many crew member hands has passed through its door frame. In the meantime, what seemed larger and more complicated works were sooner accomplishing their goals, while orbiting around this lower-profile but enduring refurbishing project. But finally, the undertakings in there seem to be reaching somewhere as steel racks and other implements are finding their way in the room.
"Jordi"