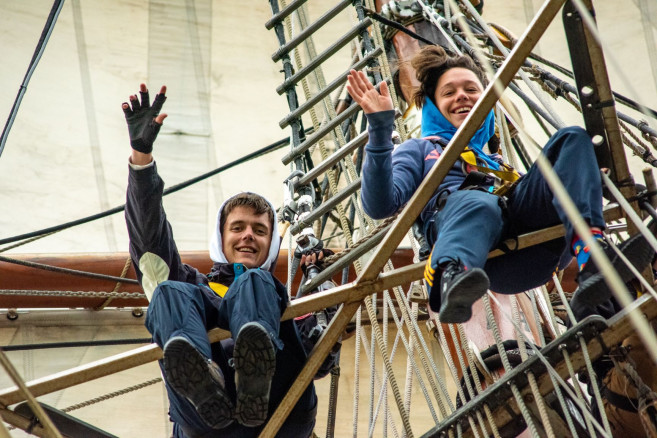 From the specialists seemingly looked down in laboratories studying the tiniest bricks of life to the artistic world, science do its workings increasing our knowledge about the cosmos. Thanks to the different branches of science and acquisition of knowledge is why we can use and enjoy from the clothes we are wearing to the smart phones that nowadays everybody seem to need to feed their lives.

As an example, on the Europa, classical historical times merge with the modern ones. 1911 hull, 1994 refurbish and pieces 21st century technology integrate for voyaging around the world, crossing oceans and visiting from to the most known remote areas. Art of sailing using knowledge obtained by many years of experience, trial and error, develops on physics and meteorology.

“…the hard won triumphs of science weaves into this warp a story of the compensations of knowledge, knowledge that is built threat upon thread by the loom of history”

In this accelerating and rapidly changing world we are more and more in need of interconnections between all disciplines, humanities and science related, to try understanding the reshaping to which humanity is bringing our planet. Now than ever we live the need of closing up nature, science, and imagination in a more holistic way, sparking our minds to comprehend and in many occasions reorient the way things are taking shape and developing. Hence the importance for developing to all generations a general conscience of what science in all its fields means and represents to everybody.

The interdisciplinary approach for trying a better understanding of the natural world, was pioneered already in the 18th century by the German geographer, naturalist and explorer Alexander von Humboldt (1769-1859). Long time passed since then but in the present, revisiting his work on a romantic view of science and philosophy reveals as a necessity:

“…it can help the scientist reclaim the long neglected aesthetic dimension of science, from delight in witnessing some consilience of facts to awe in tracing the deep structural interconnections of the natural world, Humboldt points us towards the larger dimension of this experience: the vital interdependence between science and art, knowledge and aesthetics.”

In that framework, the complement of Friesland College students on board come from a wide range of disciplines. Here, future lawyers live side by side with biologists to be, film making and communication experts on the make as well, all joining efforts to set sail, climb the rigging, study, share experiences and knowledge in a week sailing adventure along the North Sea and English Channel. Hopefully a helpful experience to increase and integrate awareness about ourselves and the world around us.

For that matter, daily sailing activities on board like setting canvas, trim your sails to the winds, steer the ship trusting your course to sharp lookouts on the for deck, merge with maintenance projects to keep the ship in good condition, like scraping, sanding and preparing wood implements for varnishing, bending on sails, splicing ropes.

All can be combined using our ship as a scientific platform too for meteorological observations and scientific projects. For that matter, today we had a try with the plankton trawling nets. The trawls require speeds between 3 to 4 knots, and the increasing winds and passing showers were giving us a couple of knots faster speed. For that reason Royals, upper staysails, Gaff Topsail were clued up, downhauls, buntlines and brails puled in. Main mast braced squarer to slightly back its remaining squares while in the fore mast barely remain filled.

Over an hour trawling two different types of nets offered samples revealing a myriad of tiny creatures: jelly Ctenophore, Polychaeta, Isopods and Amphipods seem to represent the larger diversity of life on them. All components of the Plankton in the English Strait waters, at the foot of the famous White Cliffs of Dover, which geological formation is intrinsically linked to these forms of life.

70 million years ago, on the area that would become in the far future the English Strait, sedimentary deposits started layering on a deep sea. Those sediments were largely composed by the shells and hard parts of Coccolithophores, and other marine organisms contributed to them as well, like siliceous planktonic micro-organisms, sea sponges, brachiopods, bivalves and crinoids.

The high pressures created by the piling of those sediments to about 500m of thickness, consolidate them into chalk and flint. Tectonic movements that would raise the Alps mountain range, raised them above sea level. Several glaciation related events opened the waterway between England and Europe, carving at the same time this sequence of sediments  into what we know nowadays as the White Cliffs of Dover, reaching up to 350 metes in height.

Leaving them behind we came to a point close to the English coast, a few nautical miles east of Brighton, where we dropped anchor waiting for a change in the wind direction. This expected winds will be pushing us back along the French coast on our way back to Netherlands. While anchored At this location a barbecue on deck was offered to our guests, and when the meal was finished, many took also a chance to swim in the rather cold British waters.

At about 20:30 h we heaved anchor and departed back to the East.  Gradually all sails were set again, but the engine was needed too for a few hours in order to cross and join the separation lines of heavy maritime traffic of the English Channel at the Strait of Dover. As the night sat in, we could see in the distance the lights of Dover in the English coast to port side, as well as the lights of the French coast (Calais) to starboard side.