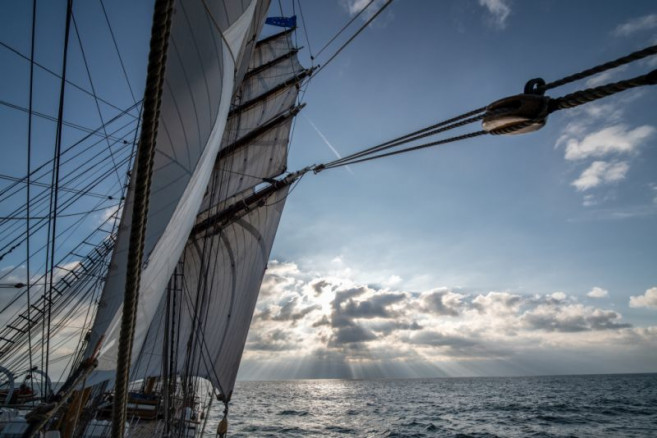 Easing winds during the day made for starting our engines again in the evening, as the Europa was barely doing any speed even though all her canvas was spread.

Late at night, just with the beginning of the new day, motor sailing conditions were good enough for trying a plankton trawl. A good chance to compare the diversity changes in the water surface between the day and the dark hours.

Plankton vertical migration in the water column between day and night is a well known phenomena, with a normal pattern involving most of the species in their great numbers descending to depths between a few and up to a 100 meters (or even more), during the day, and ascending closer to the surface at night. Why Zooplankton follow this pattern is been keeping scientists busy for a while, and the hypothesis to explain it can be related to several reasons: the most widely accepted one explains the descend to dimly illuminated areas during the daylight hours as a way to avoid predators that hunt using the visual senses. At night, darkness can protect them in the surface waters. Other hypothesis relate with seeking protection from harmful Ultraviolet radiation that can penetrate the first meters of the surface waters during the hours when the sun shines, creating a response to the changes in light intensity.

And indeed night those trawls revealed an increase on richness and diversity. Another noticeable captivating phenomena, as the nets skim through the surface next to the ship’s hull, is the Bioluminescence. Depending on the conditions, amount and type of plankton in the water and the area where we find ourselves, disturbing the sea surface at night can sometimes offer us a glow of cold light, produced by many of hose minute living organisms. In the oceans not just planktonic specie scan produce light, but also for instance jellyfish, some deep water fish and squid.

The Bioluminescence is produced by a chemical reaction when a light-producing compound called “luciferin” is oxidized with the help of an enzyme called “luciferase", releasing energy in the form of light. One of the most common groups of species producing this effect are the Dinoflagellates, single cell organisms believed to be amongst the oldest living creatures and located in the evolutionary record somewhere between plants and animals.

The samples collected were rich on Myscids, eggs, crab larvae in zoaea stage, amphipods and copepods, some of them even showing their last meal of micro-algae. Those latter ones being the real base of the marine food chain and of the utmost importance for maintaining life in this planet as we know it. Although those microscopical photosynthetic organisms account for only 1 to 2 % of the total global biomass, they are responsible for producing between 50 to 80% of the oxygen we breathe. And thanks to this process they grow, multiply and greatly contribute with an estimate of 30 to 60 % on the global atmospheric carbon fixation.

Ocean wonders of which we are just starting to unfold some of its mysteries. Surface waters have been more extensively studied but sure still hold some surprises to us, but the deepest parts of the oceans, its trenches and floor still remain the most remote and unknown area in our planet. Probably even we know better some of the celestial bodies and processes in our solar system than we know about them.

The sea, once it casts its spell, holds one in its net of wonder forever.

Hopefully for some of our student voyage crew, sailing the seas for a week had worked its magic and got hold of their imagination, opening doors for adventures, research and voyaging. A good way to build up and integrate knowledge about the world, of which its vast majority belongs to the ocean waters, still full of riddles to interpret.