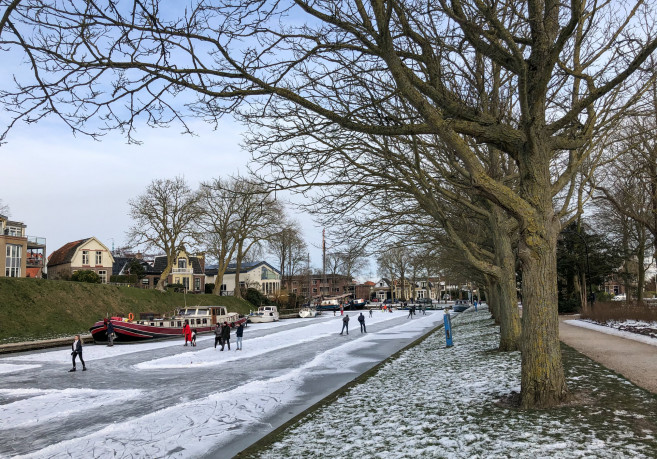 A handful of really cold days during last week have left behind an icy Netherlands. After the snowfall from a few days ago, temperatures dropped further, what made many locals show up with a smile on their faces and the ice-skates ready to fit them on and get out to the frozen Friesland canals. Not just here, but news are that all over the country, including Amsterdam city, the waters are ice-covered enough for everybody to enjoy the popular skating sport.

But the cold spell didn’t last long and the new week started already with cloudy, foggy and warmer weather. Thermometer showing positive temperatures melt the ice, for the disenchantment of the percentage of the population that hoped for keep on ice skating for longer, and perhaps to celebrate a world event skating-race that makes the hardest winters in Netherlands famous. Netherlands is well known worldwide for many reasons, but in winter, as soon as the temperatures drop below zero by several degrees, Dutch overflow with anticipation about the chances to perform again the traditional and acclaimed Elfstedentocht, the so called world’s largest ice-skating tour/race in the world.
It runs along 200 km joining the eleven Friesland cities that are connected by water channels, and up to 16.000 skaters can participate cheered by thousands of fervent supporters. Problem is that this famed and most expected event can only take place during the most severe winters, thus the last time it could be ran was in 1997. So the Dutch have been waiting for cold period like the one we just experienced for 24 years. Unfortunately it seems like this great race (that has only taken place 15 times since the idea started in 1909) will have to wait a bit longer, because despite the relatively good conditions during this 2021 February, it wouldn’t be allowed to happen due to the necessary and strict Covid-19 restrictions.

With all that, the local winter lovers will have to drop expectations and follow once more the views of the awarded American travel, sociological and novel writer Paul Theroux when he stated “Winter is a season of recovery and preparation”, while people and many companies, businesses and ships like the Europa see themselves with no other options than stop their usual activities and follow this advice.

With those last couple of decades not having such cold winters to freeze enough the canals of the area for the celebration of the Elfstedentocht, other initiatives arouse to promote in a different way the Frisian Eleven cities tour, a new vision where no ice would be necessary, but water. On that way, in 2018, eleven artists joined efforts to create a respective number of fountains, each one of them trying to reflect the history and character of each of the cities. And Harlingen is not an exception. Laying close to the tip of the Zuiderpier, a Sperm whale metal sculpture attracts local and foreign views. Visible from our decks and all the city waterfront, with it the authors Jennifer Allora and Guillermo Calzadilla pay tribute to the long history of Harlingen whaling.

Less known by the whaling than for its past trading empire, nevertheless the whale oil and baleen commerce was a major business for Netherlands already in the 17th Century. Activities boosted by the local adventurer and explorer Willem Barents and his discovery in 1596 of not just Svalbard archipelago but also the large amount of whales thriving in its rich waters. With ups and downs until the first half of the 19th Century, the Dutch trading and whaling networks stretched from the Arctic waters to the South Seas.

Seafarer country still nowadays, sure many of its maritime activities have been, and still are, on hold at the present. Many boats sit still or their activities reduced at the minimum, majestic Tall Ships moored in different ports. And the Europa having a long and non-stop refit in many of her corners, holds, cabins and public areas getting ready for the next adventurous sail.