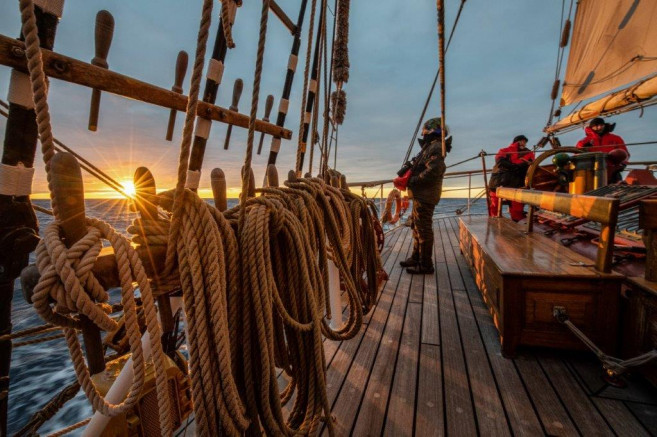 After midnight the wind shifted rapidly, veering to NE and then ENE, increasing to 22-26kn. That made for setting all sails that were still unfurled, that is all squares but the royals, lower and middle staysails and sail again for a while, now on Port tack, turning engines off and start steering on a 150º course. The situation didn’t last very long, and in the early hours of the new day the wind turned more to SE, making us brace sharper on port tack, clew up and furl the square sails together with some of the staysails. Engines are turned on once more and we motorsail with lower and middle staysails. While all this was happening, the surface water temperature drop to about 4ºC, together with the air temperature, making for cold watches out on deck. Water and air temperature drops came together with moist weather, rainy and cloudy. This cooling of the surface water temperature indicates that we were leaving behind the temperate Subantarctic area and started sailing already under the influence of the Antarctic water mass that surrounds the White Continent. The weather instability often associated with the crossing of this area, seem to stabilize during the day, becoming drier and allowing for more comfortable, though colder, work on deck. With the first lights we had suffered damage on a couple of the staysails. The vlieger and main topgallant staysail had to be brought on deck for repairs, while the wind was veering from E-ly to SSE-ly and decreasing, together with the swell. That made for a change to starboard tack, and a course of 130º.In the meantime storm jibs replaced the couple of sails in need of repair that were brought down to deck in the morning. At 20:00h we find ourselves at less that 100nm from the northern shores of Elephant Island, after covering about 120nm “as the crow flies” during the last 24h. Less than other days, but that doesn’t include the zig-zagging course we took while following the wind shifts. At this distance from the coast of the northernmost island of the South Shetland archipelago, often Fin whales can be spotted, and today several of them could be seen blowing at the distance and even three of them spent a while close to the ship. Also several interesting species of birds were flying around the ship. A handful of Light Mantled sooty albatrosses seem to follow us for a while with their elegant dark colour and soaring flight, sharing the sky with a few of the beautiful Grey-headed albatrosses. A couple of the huge Wandering albatrosses pay us a visit in the morning, while small flocks of prions and Cape petrels join us as well on our way South.