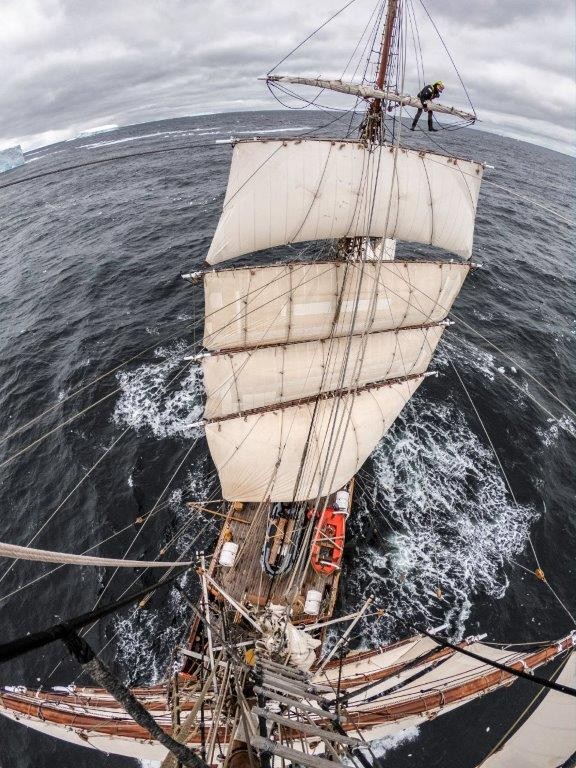 It is said Facebook knows things about you before you know them. So I found, in Ushuaia the day before boarding Europa, a promoted click-bait  article in my Facebook feed titled, ''What it's really like to cross The Drake passage?". With our own journey looming and wildly unknown, I  quickly chose to scroll past. The Drake feels long behind us now, the trauma of sea sickness mostly  forgotten, replaced with happier memories. The first day of our journey  we remained in the protection of the Beagle Channel. Only the preparation of rope guide lines (for our harnesses to clip onto) gave a hint of what was to come. As we merged from shelter on the second day,
the wind was against us. It was not the full ferocity of the famed Drake, the sea swell was not super high, nor the wind blasts too
blistering, just enough and in the wrong direction to wreck us. It was choppy, uncomfortable, and began to churn our stomachs.
Slowly and surely our numbers succumbed to sea sickness. The mood shifted onboard, becoming bleak and grey. At the same time we had begun our 3 groups (red, white, blue) of watches. The rotations were a shambles and offered a little humour at the thought that we had planned for all 12 people in a watch to be healthy and readily available. Some watch groups were down to 4 of their 12. The rest confined to beds, through the day and night, but always with a bucket in the dark, clutching to their plastic pal that's fun to be with. Praise to those who pushed through their watches feeling unwell and allowed others to rest. Thankfully I avoided being sick by quickly seeking horizontal refuge in the dark depths of my bunk. I could emerge for an hour or two for a meal but then soon needed to retreat again. Slowly the days and nights passed, the time all seemed melted into one long passage. As we came closer to the South Shetland Islands, the wind favoured us, and the ship fell into a more gentle rolling and pitching. Gradually, we discovered our sea legs, the mood lifted, and even plastic buckets were discarded. Our crew had come through The Drake. ''Overall a pretty smooth crossing", said Janke!