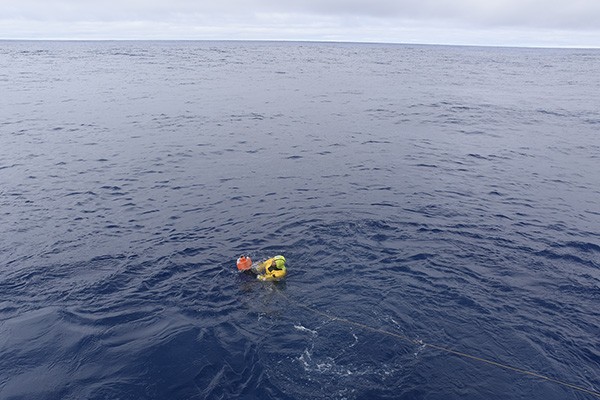 A calm day on the Drake. In the morning Sarah talks about the race to
the South Pole, and in the afternoon Belen tells us about the biology of
marine mammals. There is some splicing going on, and grommets are made.
It is not sunny, but remarkably warm compared to the Antarctic. The
Drake is smooth and there is only a little seasickness left.
Just after lunch the calm is suddenly interrupted by a good amount of
orange smoke out in the open ocean. The Man-Over-Board bells ring and
everyone immediately shifts into his emergency role. Safety nets are
removed, Drysuits are put on, lines are prepared, the stretcher appears
on deck together with medical supplies. The Europa makes a 360 degrees
turn – returning to the MOB point with backed sails. Backed sails bring
the leeward deck closer to the water, which will make it easier to
retrieve our man. As we arrive next to the orange smoke, Adam jumps
overboard, now acting as the victim. Filémon immediately jumps in as
well, acting as the savior. He will adjust the straps around Adams knees
and arms, after which he can safely be pulled back on deck. Once on deck
he is strapped on the stretcher and transported to the library. All
good. The out of date orange beacon we used for the exercise is
retrieved as well.
During the afternoon we set almost all square sails again, and the
engine is switched off. The royals and courses are set during the evening.
At our 8 O´clocky we have sailed a 141 nm, which leaves us 345 to Cape
Horn. Every time we get a new weather forecast it seems to be a little
better. The latest one even starts to look good – if we keep sailing to
the West as we do now – we will probably be able to sail on the strong
westerly winds that are predicted.
As the wind dies out late at night we switch the engine on once more and
take the square sails away. For the first time since we left we see the
moon – almost full, low over the horizon.
Sarah