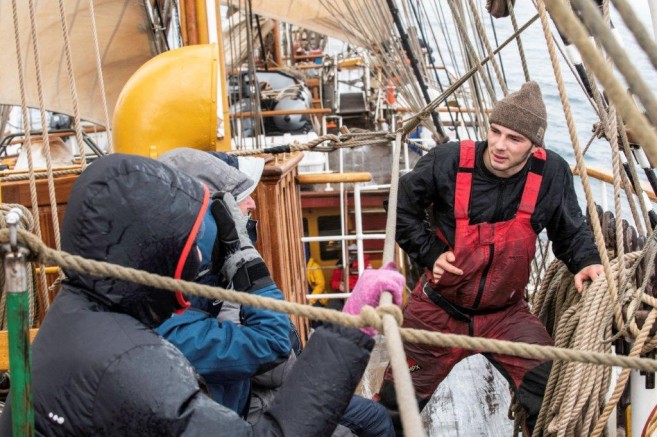 The whole day was characterized by variable winds and weather. The growing swell of the treacherous Drake Passage waters charged their seasickness toll on many of us. Despite enjoying great sailing
conditions, not many showed up today, preferring to lay down in their bunks to get over the motion sickness. Some of the people who ventured on deck or actually joined their watches, could be seen carrying the small buckets provided, just in case of a sudden urge to empty their stomachs. By the early morning the wind picked up to 20kn, backing to W-ly again, making for bracing on Starboard tack. One of the several times we adjusted the yard position during the journey. At dawn, about 04:00h, the wind started blowing a steady 30kn, gusting up to 40. Under these conditions it was time to drop and furl the topgallants, middle staysails, outer jib and change the larger Desmond for the smaller aap. Along the morning the waves and swell kept building up on the strong gusty wind. By lunchtime the wind had veered to the NW, blowing a steadier 20 to 25kn, allowing us to set the remaining canvas once again. Adapting our course to the new wind direction we also gradually steer
more southwards to keep the ship more stable and at a good speed. We actually could sail basically downwind towards the SE on this condition, but that would increase the rolling motion of the ship and slow us down. Expecting W-ly winds, we will easily bend our course from southbound to a more SE-ly one. The variable weather and wind persist in the afternoon, to the point of running out of it after coffee time. Then the engines roar again, and the crew with the help of a handful of us clew up courses and strike lower staysails. Once the job was done, what it seems to be a squall shows up in the radar, bringing with it increasing winds from the NW. We kept motoring for a while waiting for the gusts to pass, but it ended up being a general regime of wind and rain associated with a low pressure system that sweeps over the Drake. Soon the engines are turned off once more and the sails set again. For tomorrow, this atmospheric system will overtake us, leaving the Europa in a calmer area between weather systems. Steadily progressing southwards from the Beagle Channel, both air and surface water temperature are getting colder. In the early morning it was recorded to be 6.5ºC, but during the day it went down to 4.5ºC, thus indicating that we are getting closer to the Antarctic system, coming from the temperate Patagonian waters. Soon we expect to cross the zone
where those two major water bodies converge, creating an oceanographical and biological boundary caller the Polar Front. From then on Europa will be sailing in Antarctic waters until sailing back to Ushuaia in a couple of weeks.