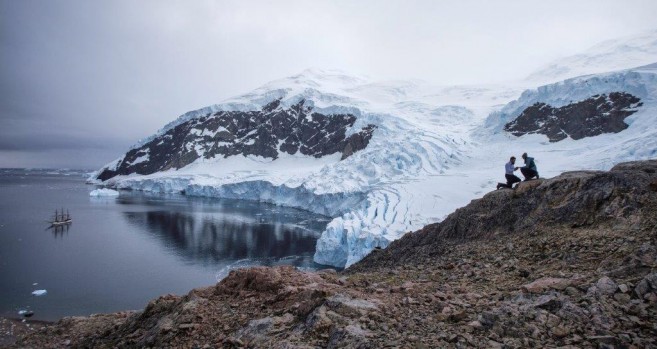 From our scenic anchorage at the glaciated bay between Goudier and Wiencke Islands, early in the morning Europa heaves anchor and starts her way on what will be our last day of activities in Antarctica before heading north to Ushuaia through the feared Drake Passage. We spend the whole morning to motor our way into 15 to 20 knots of headwinds and rainy weather along the picturesque Neumayer Channel. This waterway separates Anvers from Wiencke and Doumer Islands. As many other places in this area, it was first navigated by Adrien de Gerlache on his 1897-99 expedition, sure enjoying the grandiose mountainous and stunning scenery that it offers. For the ones who venture on deck under the windy and rainy conditions, the cloud base is high enough to let us have a glimpse of all the surroundings as well.

During the morning, Arnoud shared with us his lecture on Ozone. The ozone layer makes life on earth possible because it protects us from harmful ultraviolet light coming from the sun. It is created from oxygen under the influence of the UV light itself. However, ozone is a reactive gas and therefore disappears again. The balance between creation and destruction of ozone is influenced by other gases in the atmosphere, as well as particles. In the talk we realize also that a dramatic destruction of ozone occurs every year during the beginning of the Austral spring between September and October in Antarctica. Around the world, observations of ozone are made using various techniques, amongst others using spectrophotometers as were used in Wordie House in Faraday base (now Vernadsky). Satellite observations measure ozone globally.

At the end of the talk, Europa is leaving behind the Northern entrance of the Neumayer channel, where it joins the Gerlache Strait. We cross it on a southeasterly course towards Andvord Bay. There we plan the last landing of the trip, in the small cove of Neko harbor. As soon as Europa finds herself off the Neumayer Channel and on the more open waters of the Gerlache, the NE-ly winds are good enough to let us set some canvas. Upper and Lower Topsails helps our engine until reaching Andvord Bay. There, under calmer conditions and getting closer to our landing spot, the sails are clewed up and we get ready for the afternoon landfall. Not surprisingly, Andvord was another discovery of the Belgica expedition under Gerlache’s command. It was roughly charted by them and named after Rolf Andvord, the Belgian Consul in Christiania (Oslo) at that time. Europa makes her last approach between the numerous icebergs and brash ice that garnish the bay. For our last landing, we have arrived at this marvelous spot that sits on the continental shores of Antarctica. But beautiful as it is, Neko Harbor hides a few threats that require our attention. Part of the short hike to a scenic viewpoint, takes a walk over glaciated slopes. There we all need to take care and pay attention not to leave the already marked path, as some crevasses could be around. Down at the beach, the glacier that surrounds the cove could be dangerous as well if any big calvings may occur during our visit. In that case, the shallow waters make it possible for big waves to rapidly grow and wash the coast. Landing takes place on a small sandy beach and at the background many penguins highways are busy with many Gentoo’s climbing up and down the
snow slopes.

Many also enjoyed the hike to the vantage point with views over the whole bay, with a large Glacier at our feet…The perfect spot for a new marriage proposal from our voyage crew Benn to his girlfriend, and now fiancée, Daina. After spending a while enjoying the scenery and having a quiet few minutes listening to Antarctica, we all climb down the hill, leaving behind the couple to have a bit of intimacy. A nervous Benn, who has been waiting for this during the whole trip and is now wearing a shirt and a tie, goes on his knees and a second later the moment is sealed with a kiss and the magic word “yes”. Congratulations to the couple!

In the meantime, with most of the people gone up the hills, the shoreline became quiet, and the remaining ones greatly enjoy the quietness and beauty of the place just slowly wandering around or sitting on a rock. There, heaps of penguins are constantly on their way in and out of the water, porpoising, and having baths in the shoreline. Neko Harbour is a great spot on continental Antarctica and with the high clouds opening now and then, it offered great photo opportunities. A great farewell to our Antarctic landings. Now it is time to start our way back, first over the calm waters of Andvord Bay but soon reaching the Gerlache Strait. There a whole different weather situation awaited us. Forecasted winds of 15kn, in reality became gusts of 45kn and high seas, welcoming us to the conditions expected in the upcoming crossing of the Drake Passage. During the night we reach the exit gate of the Western Antarctic Peninsula that we will use to enter the Drake, through Schollaert Channel and Dallman Bay, between Anvers and Brabant Islands.

All this means that the beginning of the seawatches is already tonight, but not before our photo-guide team make a presentation of their work during the trip.