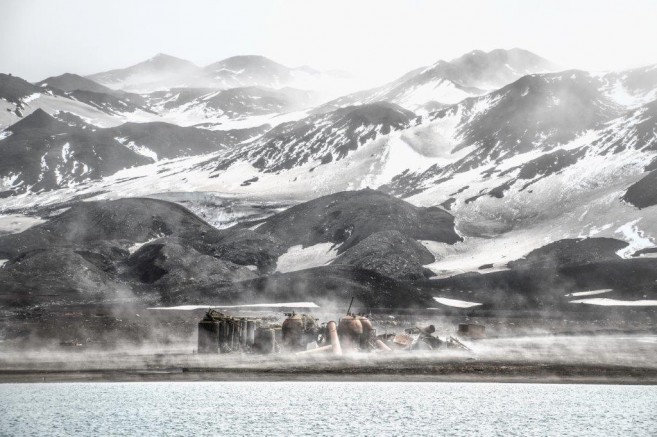 At around breakfast time we approached Deception Island. Initially we thought it might be possible to land at Baily Head but as we came close the swell was too much so a landing was not possible. We continued on in through the entrance of Deception Island known as Neptune´s Bellows at 07.30 with the intention of a landing at Whalers Bay. In the early 19th
century, the sealers gave this name to the 230m wide entrance of Deception Island because of the strong winds that often blow here. Not only is it narrow but also just under the surface in the middle of the gap Ravn Rock is hiding. Many vessels have collided with this rock including the remains of one which is on the beach at the Western shores
of the Bellows. Whalers Bay, where the ghostly Hektor whaling station was settled in 1912, is located just next to the entrance of Port Foster. At 08.00 we dropped anchor there. The weather inside Deception Island was very calm with a light breeze, good visibility and just slight rippling on the sea. We dropped 4 shackles of anchor at 50m deep and we were ready for the landing. 3 bells later, everyone got ready to go ashore. On shore we split into two groups with Nilla taking a short stroll up to Neptune´s Window for a view over Port Foster and The Bransfield Strait. The timing of this stroll worked out well as the fog was not long moving in and hindering visibility. There was a time when the ship was not even visible in the caldera. Neptune’s Window is a great lookout point over The Bransfield Strait. It was named by Lt. Penfold, from the British Royal Navy, following his survey of Deception
Island in 1948-49, because weather and ice conditions in the approach to Neptune’s Bellows could conveniently be observed from this gap. The story tells that from here, in 1820, the young sealer Nathaniel Palmer, was the first one who spotted unfamiliar land farther to the southwest, which would later turn out to be the Antarctic Peninsula. Others say
that the continent had been sighted months earlier by Thaddeus von Bellingshausen, a scientist and explorer sailing for the Russian Czar. At the same time the other group spent the time wandering around the remains of the whaling station and having some time to 9more or less) roam freely. The Hektor whaling station which operated between 1912 and
1931, has quite an incredible historical baggage too. It has also seen secret military operations during the Second World War and research conducted by the Falkland Islands Dependencies, the former British Antarctic Survey. Several whaling artifacts and scattered whalebones lay over the flat beach, swept by the inclement weather that characterizes
the island. Two fairly well preserved whaling boats (water boats) act as an eye-catcher on the way between the main whaling station area and the hills behind. The central building section of the base starts next to the curious “U” shaped floating pier used to repair propellers and shafts from the whaling vessels. A clever system that could substitute the engineering problems, time, effort and money of building an actual port and dry docking facilities. The ruins of the Station are all half buried by the eruptions that took place in the late 60’s, centered on the higher slopes, that melted away the ice supporting the volcanic cinder, creating a sort of hot mud flow that went through Whalers Bay. And today, remains of the volcanic activity are still evident, with the whole length of the beach steaming and with the warm waters along the coast. After a couple of hours ashore, we made our way back to the Europa, leaving also time for the 12 passengers on board the small motoryacht Hans Hansson, to visit the place.

At 11.45 we picked up anchor and made our way to Telefon Bay. We dropped anchor shortly afterwards and went ashore again. The fog had lifted again by this time but the temperature had dropped slightly to 3º Celsius. We first all went together up a little hill and then we split into two groups. One went with Nilla for a short walk for some panoramic views over Telefon Bay with Europa sitting calmly in the distance. The other group went with Jordi and Collette along the rim of the crater for a little longer of a walk and with some epic views out over the bay and of the volcano crater. We had a leisurely stroll where everyone got lots of photographs and the heart rate a little raised. We spent about 3 hours ashore in awe of the beauty of Deception Island and realizing how lucky we were to be spending New Years Eve in such a beautiful and desolate place. There was also lots of time to think back on the whaling station and the conditions of those who lived here in the earlier part of the century. At 17.00 we gathered on the shore to head back to the ship but not before we said hello to the Elephant and Weddell seals who were lazing about on the shore. After boarding the ship we did the obligatory boot washing, scrubbed the deck, raised anchor and we were off.....for another 3nm to Pendulum Cove. After a quick gathering we got ready to go ashore again for a volcanic bath to ease the muscles and a relaxing end to 2018 with a dip in the hot springs of the caldera on its north eastern side. There were also some remains here to visit but most people were only interested in the swimming. Many braved the cold, stripped off and went for it. There were shrieks and screams to be heard throughout the island as people plunged into the cold water and then ran for their lives the 3 meters back to shore to lie and roll around in the hot thermals down in the volcanic ash by the shore. It was a sight to see.....Europa on the bay, bodies flapping about in the water, a few penguins intrigued by what was happening, looking on from the shore and the guides happy that everyone was enjoying themselves and making memories of a New Years Eve that would remain with them forever. At 19.00 everyone got back on board, exhausted from a day full of activity but buzzing from the hike and the swim and the general good mood that was about the ship. There was a magical feeling in the air as the year was drawing to a close and everyone was aware of the beauty of nature around us. On getting back on board Merel surprised everyone with mugs of mulled wine. As the smell of this wafted through the air the voyage crew wondered what was happening when they saw the tables set out with festive table cloths and cutlery for dinner. Most unusual! But it turned out that the crew were treating all on board to a 3-course meal to be served by the crew. The galley had been flat out all day preparing the meal and as usual they did not disappoint. Following dinner everyone was in party mode. The deckhouse was a hub of activity with people laughing and sharing the joy of the day. Despite everyone being tired most were determined to stay up till midnight to ring in the new year in this spectacular setting. At 23.35 Captain Eric decided we were going to lift anchor and sail our way out of Deception Island for the new year. On approaching midnight, Merel had the bubbly out, the music was playing and everyone was out dancing away on deck. We had the countdown and everyone hugged and laughed as 2019 started on board the Europa. There was an iceberg off in the distance reminding everyone that we were starting the new year in one of the most beautiful and untouched continents in the world. As we sailed out through Neptune’s Bellows again spirits were high on board and it got even better when a few humpback whales decided to swim by and wish us a happy new year. It was a magical moment and they put on a show for us by breaching and staying close to the ship. It was a New Years Eve never to forget.