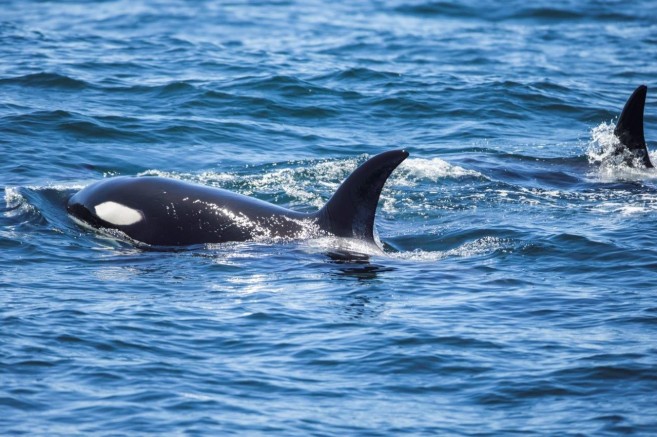 As the wind backed during the night and lost strength, it was pretty busy on deck for a few hours during last night, taking square sails away and furling them. Time to start the engines to keep a reasonable speed toward our destination at Falklands.

Lower and Middle Staysaiuls, together with Inner and Outer Jib and the Mizzen were kept set.

During the day the wind kept gradually backing, becoming W-ly and later on even SW-ly, not allowing us to sail again, keeping the Europa motor sailing with this same sail configuration for the whole day, just we had to change course and tack a couple of times.

Despite the sunny weather in the morning, temperature clearly is dropping as we get more and more South. All day the ship keeps rolling a bit under winds that shift between 15 to 25kn on a swell at times reaching a couple of metres. Under those sea conditions, seasickness hit some of us being some of the watches not complete. With the remaining available people we kept the sailhandling  and lecture program going on. Actually, during the morning the crew gave an explanation about the square sails, their assigned ropes and how they work. Like this we got our first talk on sail training that will go on for the rest off te trip.

As the day went by more and more seabirds were observed. Giant and White-chinned petrels flu around accompanied by several Cape petrels and increasing numbers of Black-browed albatrosses. A handful of Shearwaters were spotted as well. And quite surprisingly a few Magellanic penguins were also seen, purposing in groups in search for food on those offshore waters around 25nm from the Argentinean coastline.

In te afternoon, Jordi gave another talk, now on the seabirds of the South Atlantic, introducing us to the biology and identification of the different species we can see around us and the ones we expect to see during our trip. From approximately midday onwards several small groups of Peale’s dolphins were spotted, approaching the ship for short time. With their robust body of about 2m in length and beagles heads often they display some acrobatic jumps off the water, like some of them today. Even being one of the most common dolphins around the whole Patagonia area, the Peale’s dolphin has a pretty restricted distribution, as can only be found in the near shore areas and usually shallow waters of Southern South America, mainly south of the 40ºS. So our today’s sight is slightly north of their home range, and we are still a bit north of this latitude, but getting closer to it, probably entering the “roaring forties”  early tomorrow morning.

After lunch we had our daily meeting with the Captain and guides. Klaas told us that during the last 24h we had sailed 152nm, at an average of 6.3kn, some of this distance done with the help of the engines, as we are experiencing some SSW-ly winds, against us. So far since our departure from Montevideo we have covered a distance of 267nm, at a 7kn of average speed. Still 740nm to go until arriving to Falklands. The Low Pressure system that affected us until now, giving fare winds for sailing, has passed us, and now we are experiencing SW and SSW-ly winds of about 13 to 20kn. Under this situation we kept steering on a 190 to 200º course, that was leading us away from the South American coast. We want to avoid falling into the offshore Northward current that affects the Falkland area, named the Falkland Current, with its strong flow of cold water. For that we change course during the afternoon, passing the few Staysails that are set, again to Starboard tack, and  bracing the yards accordingly. Like this we start steering on a Westwards course towards the coast, as the wind keeps blowing from a SSW-ly direction.

Other activities during the day was a reminder and instructions about Safety on board. Part of the talk was practising to done drysuits and lifejackets, and get familiar with safety equipment and procedures, all done by our Mate Fosse. Along the day the permanent crew was busy up the masts, down rigging the Studding sail gear. >Tose sails were used during the crossing that brough the Europa from Canada to South America, but they are of no use in the are where we are heading, on the Southern hemisphere high latitudes, with their stronger winds.