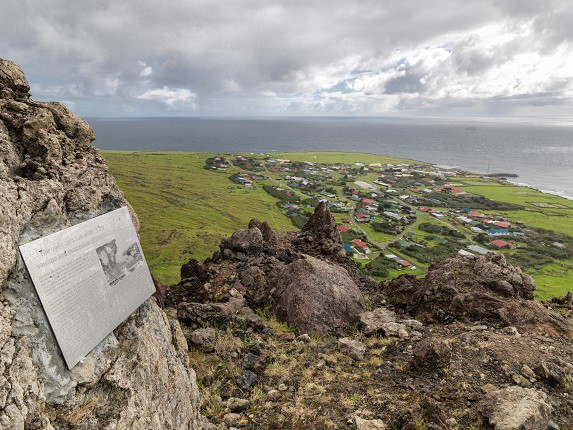 It has an aura of adventure, freedom, poetry, tranquillity and wetness around it. And so it was. We landed with our Zodiacs on a so called calm day, and that meant only a few meters of swell heaving up and down Europa's hull as we one by one were trying to board the violently moving little rubber thing in the water! Well on and I found the whole island moving but soon realised that there was not a new vulcano outbreak going on, but my sealegs trying to transform into landlegs. The island met us with a very friendly and hospitable face. We started almost right away with our different activities: walk to the -61 vulcano (outbreak 1961 wich caused an evacuation of all the islanders to Britain or two years!), tour round the settlement, tour at the school, tour to the potatoe patches, the fishfactory, a golf tournament on the most remotest course on earth, which the course itself won with all it s cows and rocks. We visited the Albatross pub, Supermarket and did individual strolling here and there.

I especially enjoyed the visit to the school; seeing and talking to children who seemed so full of harmony and content and working with their tasks concentrated and dedicated. Something for schools in Sweden (for example) to envy! As it is not at all always this very special island is possible to visit because of it's exposed position in "the seven seas", it was with extra gratefulness and respect I walked around among the friendly people and beautiful and spectacular surroundings, with the 2000m high volcano (not the "-61" one) from everywhere looming over you. Even the many dogs where friendly and seeked contact with you! At 1700 we all had to be heading back to our ship, as the harbour closed every day at that time. A very intense day full of new experiences and memories where at end.

The night after the visit was a little unrestful with dragging on the anchor and moving to a safer hold, but in the morning the forecasts still said that there would be a day of much swell, and that together with a fact of favourable winds towards Capetown, decision was made to heave anchor (sometimes more easily said than done...) and start our last leg, Edinburgh of the seven Seas - Capetown, which today on our third day at sea, lies some 120 untouched Nm ahead of us.