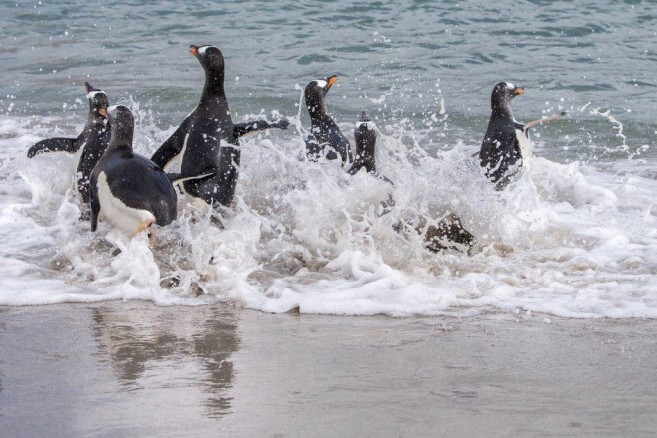 The increasingly windy night, as we barely hold our ground at anchor in the north side of Saunders Island, didn’t augured a good chance to land there this morning. And indeed, despite the sunny weather, gusts over 30kn made the Captain and guides be cautious about it. Already from the ship we could see the swell breaking along the 1.4km northern beach of The Neck, the narrow, low lying sandy isthmus between Elephant Point to the main Saunders Island.

Anyway it is always worth to give it a try, and a scout zodiac is sent to check the conditions in situ. The group of Commerson’s dolphins that had been around the ship since last evening, happily escort the zodiac from the ship to shore. There it became obvious that the landfall this morning was not going to be possible here. After the final decision is taken, Europa heaves anchor to sail approximately 15nm to our next intended landing, Carcass Island. There more shelter from the strong WSW winds is expected.

During the morning, as we motor our way with the wind practically blowing to our nose, Belén offered an interesting talk about general underwater acoustics, her favourite topic. On it she gave brief explanations about underwater sound properties and sofar channel and the first experiments about sound propagation. Then we got some examples of the different natural sounds in the oceans, stepping afterwards into the basic functions of wildlife sounds in the ocean and their uses for communication purposes, giving the example of the whales. As a curious fact, she talked about the different songs recorded within different populations of Humpback whales.

Not just the well know whale songs exist but also other marine wildlife use this method, and for example, some of the sounds using by different species of seals are pretty interesting. Belén brought a hydrophone on board with the idea of trying some underwater recordings, and she introduced the technique to us, setting up some objectives to record sounds while sailing in the Europa. Before lunchtime we were arriving to the Southern shores of Carcass Island, at the shores of the so called Leopard Beach. Another Tourist Expedition ship was around, the Ushuaia, but they were already leaving the area after using this landingspot during the morning.

The curious island’s name come from the HMS Carcass, a sloop that arrived here in 1766 together with the frigate HMS Jason and the store ship HMS Experiment to establish the first British settlement at the nearby Port Egmont. The HMS Carcass had also the mission to survey the waters around the island that nowadays bears her name. This scenic island has been always free of rats and cats, allowing the birdlife to flourish, as we could quickly see after just stepping ashore. Countless Upland geese, together with a few Ruddy headed, wandered the white and sandy Leopard Beach. With its tropical appearance this beach holds as well a healthy population of Magellanic and Gentoo penguins.

The grassy meadows festooned with tussock grass were teeming with birdlife, including the rare Cobb´s wren which can only survive on rat free islands. After walking around this area for a while, Jordi decided to try to reach Carcass settlement, a couple of kilometres hike following the coast, while another group decided to stay behind and take it easier with Belén. The walker’s group indeed reached the small settlement. The island has been inhabited and owned since 1872. Nowadays proprietors are the nice couple Rob and Lorraine McGill, who have lived here for over 30 years. The picturesque farming settlement is surrounded by Monterey cypress trees, cabbage palm and Nez Zealand flax.

There we were warmly welcomed by them and the 3 Chilean employees that maintain the farm and prepare a nice High-Tea for the visitors. Like this we spent an enjoyable afternoon as the wind dropped and the swell died down. Actually landing straight in front of the settlement this morning was not possible due to the high swell and surge at the coastline, but now it looked flat calm and windless. So, Jordi called the ship to come around and do the pick ups here.

While waiting there we could all relax at the beach after a nice cup of tea and a great assortment of homemade cookies and cakes. At the coastal area, numerous birds were all around, including the most curious and inquisitive Striated caracaras. After being picked up the ship makes her way to a safer anchorage where we plan tomorrow’s activities. After dinner Europa anchors at Hope Harbour, next to Grave Cove, a sheltered bay about 2nm from the well-known West Point Island.